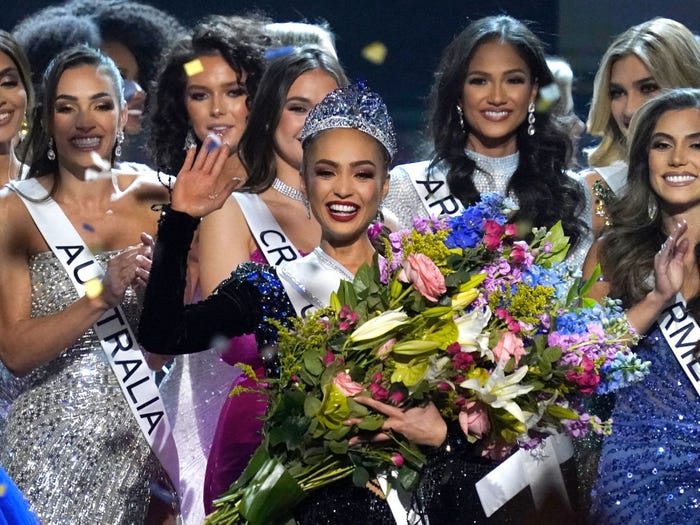 Miss Universe was announced on Saturday night. R’Bonney Gabriel, a fashion designer, model, and sewing instructor from Texas, is the first Filipino American to win Miss USA, according to competition authorities.

When the winner was finally revealed in a spectacular fashion, Gabriel closed her eyes and held hands with Miss Venezuela, Amanda Dudamel, and smiled when her name was announced.

At the 71st Miss Universe Pageant in New Orleans, she was presented with a bunch of flowers, draped in the winner’s sash, and given a tiara as thundering music played in the background.

Gabriel was questioned on how, if she were to win, she would endeavor to show that Miss Universe is “an empowering and progressive organization” during the Q&A session for the three finalists.

She said, “I would use it to be a transformative leader,” highlighting her work creating clothing out of discarded materials and teaching sewing to victims of domestic abuse and human trafficking.

“Investing in others, investing in our community, and using your special gift to make a difference are all extremely vital,” Gabriel concluded. We all have something unique to offer the people in our lives, and when we do, we transform them and use it as a catalyst for change.

Gabriel is a former high school volleyball player and a University of North Texas alumnus, according to Miss Universe. She is the CEO of her own sustainable clothing business, according to a brief biography that was placed on the organization’s website.

According to the competition’s organizers, around 90 participants from all over the world competed in “personal statements, in-depth interviews, and numerous categories, including evening gown & swimwear.”