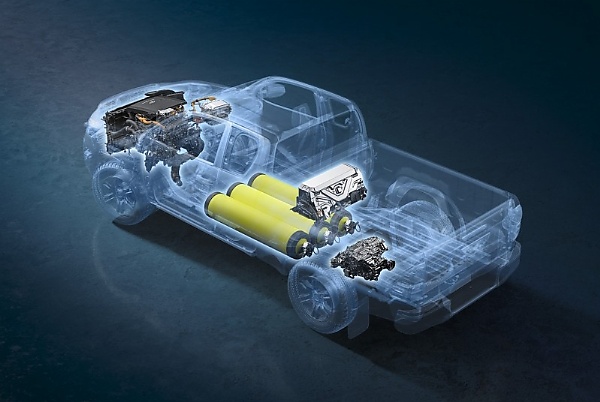 Toyota unveiled a pickup and SUV fueled by hydrogen.

The Japanese carmaker is working on a variety of fuel-powered vehicles because it believes the fuel has a promising future as a battery-free option in the zero-emissions automobile world of the future.

It provides the Mirai in the state, which is the only one with anything like a public refueling network, in addition to the fuel cell-powered semi trucks it is currently testing in California.

In a fuel cell, hydrogen that has been stored and oxygen from the air react chemically to produce energy. Compared to a battery pack, the system is lighter and can be refueled considerably more quickly.

The 182 horsepower powertrain from the Mirai has now been installed in a pickup for testing by Toyota’s U.K. division. It is employing a Hilux, a truck that is comparable in size to the Tacoma and is available outside of the United States.

Since a driveshaft is no longer required, the fuel cell is mounted underneath the hood, and three hydrogen tanks are located below the cabin. The rear wheels are propelled by a solitary electric motor.

Toyota is also investigating the straightforward combustion of hydrogen, which produces water vapor instead of carbon dioxide, in an internal combustion engine.

The 1.6-liter, three-cylinder GR Corolla sports car engine, which produces 268 horsepower, has been modified with high-pressure hydrogen injectors, and it has been put into a Corolla Cross subcompact SUV for testing in Japan.

Toyota claims that it generates roughly the same amount of power as when using gasoline, and that a new fueling system has reduced the time it takes to fill the tank from five minutes to one and a half.