Latest News
Home News Biden says he will speak with Netanyahu as pressure mounts on U.S. to call for cease-fire in Israel-Hamas violence 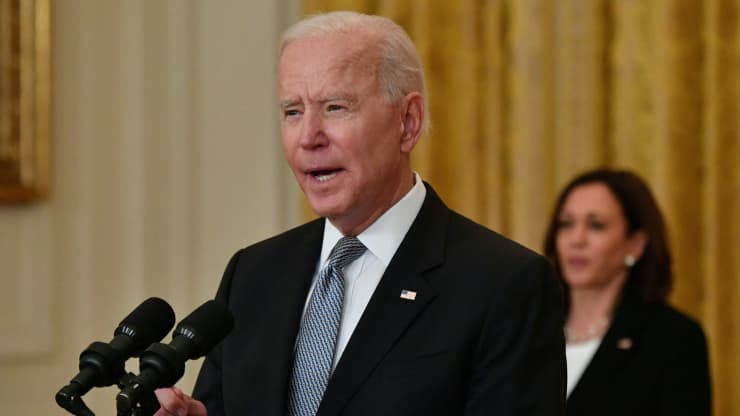 Biden says he will speak with Netanyahu as pressure mounts on U.S. to call for cease-fire in Israel-Hamas violence

Posted By: Editorial Teamon: May 17, 2021In: NewsNo Comments
Print Email

President Joe Biden said Monday that he will speak with Israeli Prime Minister Benjamin Netanyahu as fighting between Israel and Hamas enters its second week with no clear end in sight.

Biden said that he would have more to say about the unfolding violence after speaking with Netanyahu.

On Sunday, a group of 28 Democratic senators called for an immediate stop to the ongoing fighting between Israel and Hamas.

“To prevent any further loss of civilian life and to prevent further escalation of conflict in Israel and the Palestinian territories, we urge an immediate ceasefire,” the senators wrote.

The statement’s signatories include Sens. Cory Booker of New Jersey, Tammy Duckworth of Illinois, Dick Durbin of Illinois, Tim Kaine of Virginia, Angus King of Maine, Amy Klobuchar of Minnesota, Bernie Sanders of Vermont, Mark Warner of Virginia and Elizabeth Warren of Massachusetts. King and Sanders are independents who caucus with Democrats.

Palestinians gather at the site of destroyed houses in the aftermath of Israeli air and artillery strikes as cross-border violence between the Israeli military and Palestinian militants continues, in the northern Gaza Strip May 14, 2021.
Mohammed Salem | Reuters

“This latest round of violence only perpetuates the cycles of death, destruction and despair, and pushes farther to the horizon any hopes of coexistence and peace,” Guterres said during a U.N. Security Council meeting.

“Fighting must stop. It must stop immediately. Rockets and mortars on one side and aerial and artillery bombardments on the other must stop,” he added.

Violence intensified over the weekend, with Israel conducting an airstrike Sunday that leveled several homes in the Gaza Strip. The strike, the deadliest yet in the ongoing conflict, killed at least 42 people. Meanwhile, more than 3,000 rockets bombarded Israeli cities.

A ball of fire erupts from the Jala Tower as it is destroyed in an Israeli airstrike in Gaza city controlled by the Palestinian Hamas movement, on May 15, 2021.
Mahmud Hams | AFP | Getty Images

On Sunday, Netanyahu defended the punishing airstrike on Saturday that collapsed a 12-story building housing international media, citing intelligence that Hamas was using a portion of the building to plan terror attacks.

Netanyahu said that the building’s occupants, which included the Associated Press, broadcaster Al-Jazeera and other media agencies, were given an hour’s notice to evacuate before the strike.

“Here’s the intelligence we had,” Netanyahu told CBS Sunday program “Face the Nation.”

″[It’s] an intelligence office for the Palestinian terrorist organization housed in that building that plots and organizes the terror attacks against Israeli civilians. So, it’s a perfectly legitimate target,” he explained.

White House press secretary Jen Psaki would not confirm whether the Biden administration agreed with Israeli intelligence assessments. She instead reiterated calls for a de-escalation in violence.

“The role we are playing is, how can we help bring an end to the violence, and our calculation at this point is having those conversations behind the scenes,” Psaki said Monday. “Our approach is quiet, intensive diplomacy.”

Biden raised concerns over the fierce fighting and the safety of civilians and journalists. He also underscored his commitment to a negotiated two-state solution as “the best path to reach a just and lasting resolution of the Israeli-Palestinian conflict,” according to a readout.

Secretary of State Antony Blinken told reporters on Monday that officials across the administration are “working around the clock” to bring an end to the violence. Blinken added that U.S. envoy Hady Amr, deputy assistant secretary of State for Israel and Palestinian affairs, was on the ground in the region.