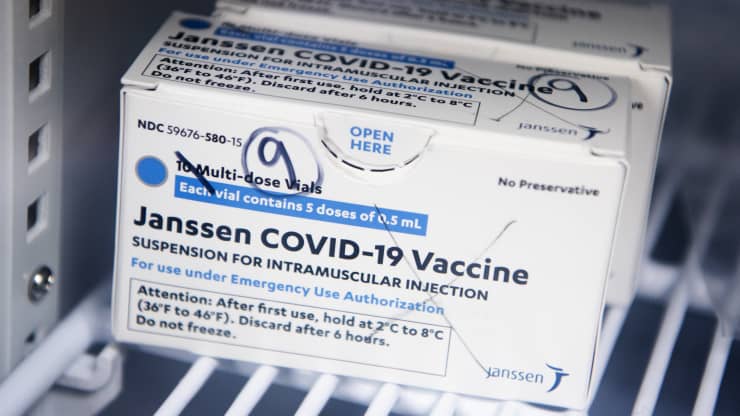 ″(The) EMA’s safety committee (PRAC) concluded that a warning about unusual blood clots with low blood platelets should be added to the product information for COVID-19 Vaccine Janssen,” the agency said in a press release.

“Healthcare professionals and people who will receive the vaccine should be aware of the possibility of very rare cases of blood clots combined with low levels of blood platelets occurring within three weeks of vaccination.”

The EMA researched all available evidence, it said, including eight reports from the U.S. of serious cases of unusual blood clots — one of which had a fatal outcome. More than 7 million people had received the vaccine in the United States as of April 7, it said.

The U.S. Food and Drug Administration earlier this month advised states to suspend the use of J&J’s shot “out of an abundance of caution.” As a result, the pharmaceutical firm decided to delay the rollout of its vaccine in Europe while regulators assessed any risks. On Tuesday, the company confirmed that it would resume shipments to the bloc after the EMA’s review.

The EMA already said last week that while reviewing the latest details, it was still of the view that the benefits of the vaccine outweighed the risks.

The J&J shot, which only requires one does, was initially greenlit in the European Union on March 11. It now remains to be seen how the different countries will interpret the latest guidance from the EMA. France has already indicated it will only use the vaccine on people aged above 55.

“COVID-19 is associated with a risk of hospitalisation and death. The reported combination of blood clots and low blood platelets is very rare, and the overall benefits of COVID-19 Vaccine Janssen in preventing COVID-19 outweigh the risks of side effects,” the EMA said on Tuesday, using the name of J&J’s Belgian unit.

This is not the first issue with blood clots and a Covid-19 vaccine.

More than a dozen European countries suspended the use of the AstraZeneca shot in March after some people who received the shot reported unusual incidents with blood clots, 18 of which were fatal.

The EMA reviewed the cases and also said the vaccine was safe and should be used in the fight against the coronavirus.

Nonetheless, a few days later, the EMA also said there was a “possible link to very rare cases of unusual blood clots with low blood platelets” and this should therefore be listed as “very rare side effects” for the AstraZeneca vaccine.

Some countries adjusted the rollout of this vaccine, deciding to administer it only to people above 60 years of age, and Denmark went further by completely stopping its use.

So far, there have been more than 103 million doses administered in the EU, according to data from the European Centre for Disease Prevention and Control.