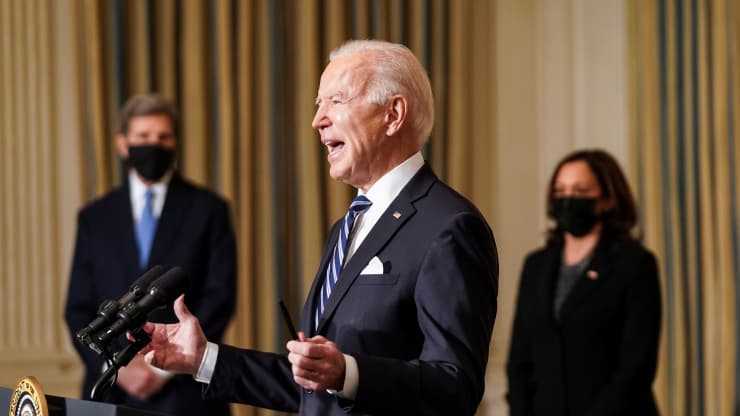 President Joe Biden on Friday said that Vladimir Putin of Russia and Xi Jinping of China are invited to the global leaders’ climate summit the administration is hosting in April.

The president told reporters that he hasn’t directly invited Putin or Xi but said the leaders “know they’re invited” to the summit, an event the U.S. is hosting to advance global efforts to reduce climate-changing fossil fuel emissions.

The White House later published a list of 40 world leaders invited to the summit, including Xi and Putin.

Biden said he spoke to British Prime Minister Boris Johnson Friday and EU member states Thursday. The White House has prioritized speaking with close U.S. allies before reaching out to China and Russia.

The administration plans to unveil a new carbon emissions target at the summit, which will be held remotely on April 22 and 23. Biden pledged to host the climate talks during his campaign and through an executive order in January. The summit takes place ahead of November’s U.N. global climate talks in Glasgow, Scotland.

The U.S. is the world’s second-largest emitter of greenhouse gases behind China. Russia is the fourth-largest emitter. It’s unclear if Russia and China will accept invitations to the summit or whether they’ll be interested in working with the U.S. to curb emissions.

The White House has said it wants to cooperate with Russia and China on climate change despite rising tensions between the countries in a number of other areas. The Biden administration has repeatedly singled out Beijing and Moscow as top national security threats to the U.S.

The Obama administration vowed to cut U.S. emissions up to 28% below 2005 levels by 2025, but former President Donald Trump halted federal efforts to meet that target. The Biden administration is expected to introduce a stricter goal for the nation to meet by 2030.

The summit comes as Biden pledges to transition the U.S. economy towards clean energy and reduce emissions from coal, natural gas and oil. Biden brought the U.S. back into the Paris climate accord in January after Trump said in 2017 he was pulling the country out.

Biden has said that the U.S. will recommit to its emissions reduction goals under the accord and lead the effort to help other nations update their own goals. The president has also vowed to put the U.S. on a path to zero-carbon electricity generation by 2035 and net-zero emissions by 2050.