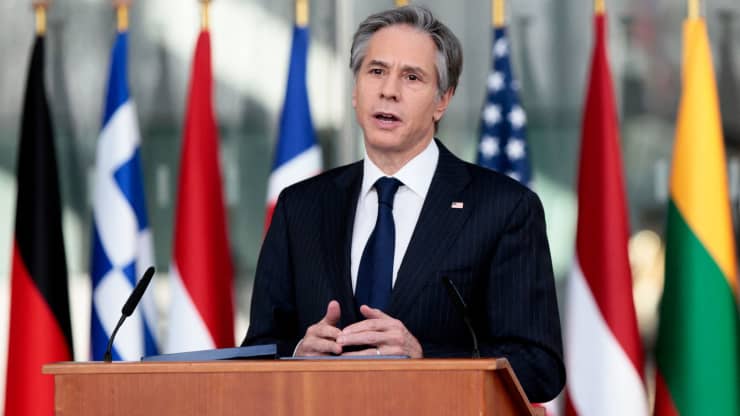 WASHINGTON – Secretary of State Antony Blinken issued a strong rebuke Wednesday of China’s sweeping use of coercive measures and urged NATO allies to work with the U.S. in order to mount pushback on Beijing.

Blinken, in an address at NATO headquarters in Brussels, said the U.S. wouldn’t force its European allies into an “us or them choice.” However, he made clear that Washington views China as an economic and security threat, particularly in the realm of technology, to NATO allies in Europe.

“There’s no question that Beijing’s coercive behavior threatens our collective security and prosperity and that it is actively working to undercut the rules of the international system and the values we and our allies share,” Blinken said after holding two days of consultations with NATO allies. The North Atlantic Treaty Organization, or NATO, is an alliance made up of 30 member nations.

The secretary said there is still space to cooperate with China on common challenges like climate change and health security, but called for NATO to stand together when Beijing coerces one of the alliance’s members.

“We know that our allies have complex relationships with China that won’t always align perfectly with ours. But we need to navigate these challenges together. That means working with our allies to close the gaps in areas like technology and infrastructure, where Beijing is exploiting to exert coercive pressure,” Blinken said.

“When one of us is coerced we should respond as allies and work together to reduce our vulnerability by insuring our economies are more integrated with each other,” America’s top diplomat said.

The Department of the Treasury accused China of using repressive tactics for the last five years against Uyghurs and other members of ethnic minorities in the region, including mass detentions and surveillance.

“Targets of this surveillance are often detained and reportedly subjected to various methods of torture and ‘political reeducation,’” the Treasury wrote in a statement.

Beijing has previously rejected U.S. charges that it has committed genocide against the Uyghurs, a Muslim population indigenous to the Xinjiang Uyghur Autonomous Region in northwest China.

Ahead of the Alaska talks, Blinken slammed China’s sweeping use of “coercion and aggression” on the international stage and warned that the U.S. will push back if necessary.

The tension between Beijing and Washington soared under the Trump administration, which initiated a trade war and worked to ban Chinese technology companies from doing business in the United States.

Over the past four years, the Trump administration blamed China for a wide range of grievances, including intellectual property theft, unfair trade practices and recently, the coronavirus pandemic.

President Joe Biden, who spoke to Chinese President Xi Jinping last month, has previously said that his approach to China would be different from his predecessor’s in that he would work more closely with allies in order to mount pushback against Beijing.

“We will confront China’s economic abuses,” Biden said in a speech at the State Department, describing Beijing as America’s “most serious competitor.”

“But we’re also ready to work with Beijing when it’s in America’s interest to do so,” the president said. “We’ll compete from a position of strength by building back better at home and working with our allies and partners.”

Blinken, the first Biden Cabinet-level official to visit NATO, reiterated the U.S. commitment to the world’s most powerful alliance.

“We need to be able to have these tough conversations and even to disagree while still treating one another with respect. Too often in recent years, we in the U.S. seem to have forgotten who our friends are. That has already changed,” Blinken said, without mentioning the “America First” policy championed by the Trump administration.

Former President Donald Trump frequently dressed down NATO members throughout his presidency and had previously threatened to leave the alliance.

In December 2019, Trump told NATO leaders in London that too many members were still not contributing enough financially and threatened to reduce U.S. military support if allies do not increase spending.

Trump singled out German Chancellor Angela Merkel for not meeting the 2% of GDP spending goal set at the 2014 NATO summit in Wales.

Germany’s Chancellor Angela Merkel (R) looks at US President Donald Trump (R) walking past her during a family photo as part of the NATO summit at the Grove hotel in Watford, northeast of London on December 4, 2019.
CHRISTIAN HARTMANN

Germany, at the time, was only one of 19 NATO members that had not met the 2% GDP spending goal set at the 2014 summit.

Blinken recognized the testy trans-Atlantic relationship over defense finances and called for a “more holistic view of burden sharing.”

“We recognize the significant progress many of our NATO allies have made in improving defense investments,” he said, adding that “no single number fully captures a country’s contribution to defending our collective security and interests, especially in a world where a growing number of threats cannot be confronted with military force.”

“We must acknowledge that because allies have distinct capabilities and comparative strengths, they will shoulder their share of the burden in different ways,” Blinken said.