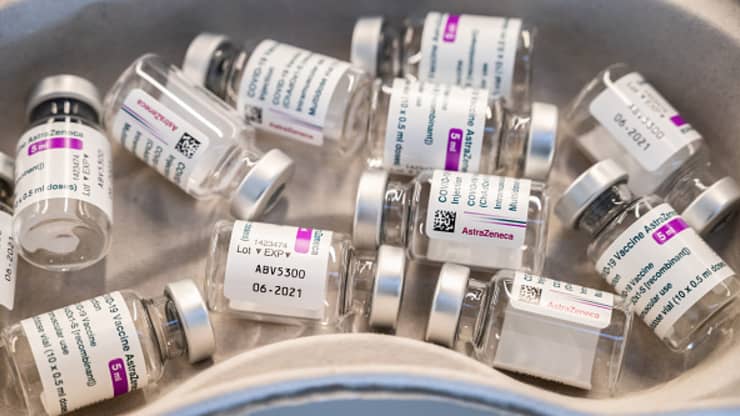 The World Health Organization said Wednesday that coronavirus vaccination rollouts using the AstraZeneca-Oxford University shot should continue while it carries out a safety review.

The latest guidance from the global public health body comes after a raft of European countries announced that they would suspend use of the shot over concerns that it could be linked to reported cases of blood clots in the region.

WHO’s Advisory Committee on Vaccine Safety has been reviewing the available data on the vaccine. On Wednesday, the WHO issued a statement in which it said that “vaccination against COVID-19 will not reduce illness or deaths from other causes.”

“Thromboembolic events are known to occur frequently. Venous thromboembolism is the third most common cardiovascular disease globally,” it said.

It said that while it was routine for countries to signal potential adverse events following immunization, particularly in mass vaccination campaigns, “this does not necessarily mean that the events are linked to vaccination itself.”

Nonetheless, it added, “it is good practice to investigate them. It also shows that the surveillance system works and that effective controls are in place.”

The WHO is in regular contact with the European Medicines Agency (EMA) and regulators around the world for the latest information on Covid-19 vaccine safety, it added.

The WHO said it will immediately communicate the findings to the public once its review is complete. “At this time, WHO considers that the benefits of the AstraZeneca vaccine outweigh its risks and recommends that vaccinations continue,” it added.

Sweden, Lithuania and Latvia on Tuesday became the latest countries to suspend the use of Oxford-AstraZeneca vaccine over blood clot concerns, following in the footsteps of Germany, France, Spain, Italy and Ireland, among other European nations. More than a dozen European countries have temporarily paused use of the vaccine.

Emer Cooke, the EMA’s executive director, said at a press briefing Tuesday that a review into the shot’s safety was “an ongoing process” but said that in a mass vaccination program of millions of people it was not unexpected to receive some reports of adverse events.

Experts brought together by the EMA were tasked, she said, with deciding whether there was a causal link between the handful of adverse events involving blood clots, and the vaccine, however.

“This requires a very thorough analysis of all the data,” Cooke said. “At present there is no indication that vaccination has caused these events,” she reiterated, adding that the crucial health benefits of the vaccination program, and the AstraZeneca shot within that, continued to outweigh the risks.

“Thousands of people are dying every day across the EU … these are very rare thromboembolic events or blood clots.” A conclusion of the EMA’s review is expected Thursday.

The strategy from these EU nations has baffled health experts and has prompted concerns that the move could further damage confidence in the vaccine and slow down an already sluggish immunization program in the bloc, all while many countries are seeing a spike in infections due to more infectious coronavirus variants.

Some analysts have questioned whether the decision has a political dimension given previous doubts over AstraZeneca’s trial data, efficacy in the over-65s (it has been proven in various studies to be highly effective at reducing Covid-19 cases, hospitalizations and deaths) and disputes over vaccine supplies.

Not all European countries have stopped using the shot. Belgium, Poland and the Czech Republic have all said they will continue to use the shot, saying that the benefits outweigh the risks. Belgium went further, with its health minister saying that pausing the immunization program would be “irresponsible.”

AstraZeneca has staunchly defended its vaccine, saying in a statement Sunday that the number of blood clots recorded post-vaccination were lower than could be expected to occur naturally.