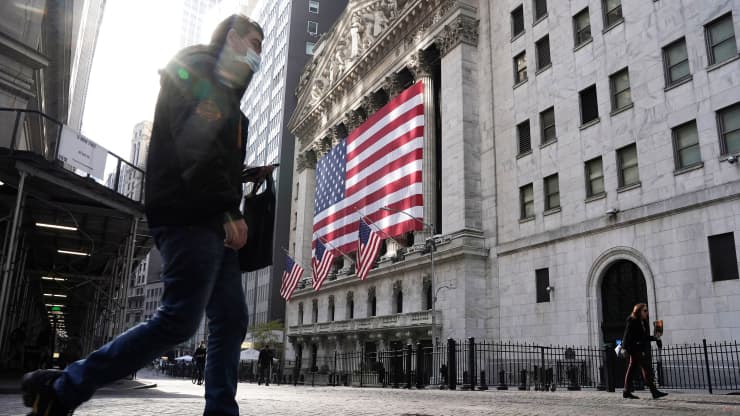 Growing inflation concerns, optimism the economy could surge and some technical factors are combining to drive interest rates higher at a rapid clip.

But on Thursday, for the first time, the market has begun to question how long the Fed can stay on hold when the economy could come thundering back. Interest rates on the long end, meaning 10-year and 30-year yields, have been rising, but they were joined Thursday by 2-year and 5-year yields, an area impacted more directly by the Fed. Yields rise when prices fall.

Bond yields have been rising with each positive development on the vaccine front and decline in Covid spread rates. Couple that with more powerful fiscal stimulus, and the recovering economy could take off like a shot. The House of Representatives is moving to approve the $1.9 trillion Covid relief bill by Friday, which would send funding to states, boost businesses and put $1,400 in cash in the hands of millions of people.

“I think this whole market is sort of a work in progress, trying to feel out where the economy is actually going and what will the Fed actually do,” said Ralph Axel, Bank of America U.S. rates strategist. “We’re starting with a Fed that’s not supposed to hike [interest rates] until March 2023.That’s a good two years out.”

Axel said the Fed is still expected to remove policy very slowly, and it would first taper back on its bond buying program before it raises rates. Bank of America expects Fed officials to discuss paring back the $120 billion a month bond purchases later this year but begin to taper down buying sometime next year.

“I think the heart of the matter is the the two levers the Fed has to pull is the taper schedule, or the QE schedule and the hike cycle,” he said. “Those levers are very much at play with the changing expectation for the growth outlook.”

Fed rate hikes are still expected way in the future but those expectations changed slightly in the past day, since Fed Chairman Jerome Powell’s testimony before Congress Tuesday and Wednesday.

The fed funds futures market is now pricing in the first full rate hike for the first quarter of 2023 or March. Axel said it had been priced in to the second quarter of 2023, in the month of May. Futures also price a partial hike into October, 2022.

Axel expects the market to begin to discuss rate hikes later this year, as the economic data improves. “Our GDP forecasts are off the chart,” said Axel. Bank of America expects 8% growth in the second quarter, 11% in the third quarter and 5% for the fourth quarter. “We’re also not yet including any kind of infrastructure bill into Q4.”

Axel said even if the time frame moves up on the Fed’s tightening of policy, it will still be in the distant future and the Fed will take it slow.

“Powell gave the green light for yields to go up. He said rising yields were the result of the strength in the economy,” said Michael Schumacher, director of rates at Wells Fargo.

Schumacher said the bond market was catching up to the optimism already seen in the stock market, as stocks traded to new highs.

“We’re getting no hint from the Fed that it wants to dampen this down,” he said. “The Fed will have to come out and say something.”

The jump in Treasury yields is clearly spooking the stock market, but it’s reflecting forecasts for 6% growth this year and a strong 2022. According to the CNBC/Moody’s Analytics survey, economists expect the economy to grow by a median 6% this year.

Jim Caron, head of global macro rate strategy at Morgan Stanley Investment Management, said it’s the speed of the rise in yield that’s unnerving the market, since the consensus view was that the 10-year would reach 1.5% by year end.

“So far, this sharp move higher in UST 10y yields has only had marginal impact on equities and virtually no impact on credit spreads, as they are generally tighter today than where they were when we started the year. In addition, the US dollar has not strengthened on this move in yields either. All of which are components of financial conditions that are still easy, not tight, despite the rise in UST yields,” Caron wrote.

“Perhaps it could then be concluded that rising UST 10y yields reflect the recent upgrade in fundamental economic growth expectations and there is nothing nefarious at work,” Caron added.

Yields move opposite price, and the swift rise in the 10-year yield of more than 30 basis points (0.25) in 10 sessions has already impacted the lending market. Mortgage applications fell 11.4% this past week as rates rose.

The bond market has been sensitive to the fact that a strengthening economy could also lead to some inflation. As yields go higher, the bond market’s inflation expectations have also been rising and one market metric is pricing in average inflation at 2.32% over the next five years. Inflation has barely been able to crack the Fed’s 2% target for years, and while volatile, economists do not expect it to become runaway.

Still, it is making markets nervous and yields have been rising all around the world, as commodities prices surge. Oil is up about 18% just in the past month, and copper is up 17%.

Powell, in his comments this week, played down inflation as an issue and said the Fed expects to see bigger numbers this spring due to the base effects of the sharp drop off in prices last March and April when the economy was shut down. But he does not see inflation running hot, even with strong economic growth, and he said it could be three years before inflation hits the Fed’s target consistently.

“It will be high in the near term because of the base effect but once you get past that, it’s probably around 2%, higher than it has been , but not enormously high,” said Schumacher.

The rise in rates has been a steady creep but on Thursday, the 10-year yield ran higher quickly and snapped suddenly higher temporarily around the auction. One side effect of higher Treasury yields is that mortgage activity slows down. That results in the mortgage market changing its tact in hedging and traders sell Treasurys, compounding the sell off.