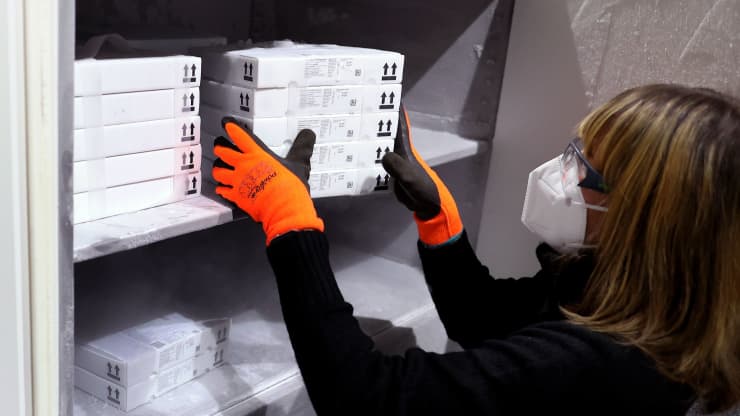 European Commission President Ursula von der Leyen on Tuesday called on coronavirus vaccine makers to deliver on their pledges to supply millions of doses to the bloc, and beyond.

Her comments come amid an unprecedented challenge for the EU when it comes to the rollout of vaccines to each of the 27 member states. The EU’s vaccination drive began on Dec. 27, a later start than the U.K. or the U.S., and the patchy, sluggish rollouts across many of its members have perturbed officials and the public.

“Europe is determined to contribute to this global common good, but it also means business,” she said

A few hours later and at the same event, German Chancellor Angela Merkel called for more cooperation and multilateralism when it comes to the life-saving jabs.

She told the World Economic Forum that “it has become even clearer to me than it was before that we need to choose a multilateral approach, that a self-isolating approach won’t solve our problems.”

The coronavirus pandemic had illustrated the high degree of interdependence and interconnection in the world, she added, and that Germany had initially made the mistake of looking inward to try to beat the pandemic, rather than working with others.

“We were inward-looking, shutting ourselves off against each other, but very quickly we learned the lesson (not to do that)” she said.

With surging infections and associated lockdowns, the EU is now facing the challenge of vaccine shortages. Both Pfizer-BioNTech and AstraZeneca have warned of production issues that will either mean a temporary reduction in production, and the supplies that the EU gets, and in AstraZeneca’s case, could mean that it will not be able to fulfil a pledge to deliver 80 million doses by the end of March.

An unnamed official told Reuters last week that AstraZeneca had said the supply would instead be around 31 million doses, around 60% fewer doses than envisaged by the EU, which is expected to approve the vaccine for emergency use by the end of this week.

The news has understandably enraged the bloc, which has threatened to put limits on vaccine exports from the EU. The Pfizer-BioNTech vaccine is manufactured in Belgium.

Talks between the EU and AstraZeneca are set to resume on Wednesday, the former having asked the drugmaker to provide it with detailed plans over its vaccine production and distribution so far. EU Health Commissioner Stella Kyriakides said in a statement Monday that an “export transparency mechanism” would be put in place to assess the export of vaccines from the EU.

Vaccine supplies are a hot topic of conversation even beyond Europe, which, like other wealthy nations, has at least embarked upon its vaccination drives. Poorer countries say they are at the back of the line when it comes to accessing life-saving shots.

Last week, the head of the World Health Organization said that the equitable distribution of coronavirus vaccines was at “serious risk” and he warned of a “catastrophic moral failure” if vaccines were not distributed fairly.

That point was reiterated on Tuesday by Angel Gurria, secretary general of the Organisation for Economic Co-operation and Development.

“This is the greatest test for mankind as a whole, and for the OECD countries in particular because most of these countries have bought three, five, even 10 times as many vaccines as their whole population,” Gurria told “Squawk Box Europe.”

Those vaccines are “sorely needed” in the developing world and therefore could be “a very important source of support and international cooperation of overseas development assistance,” he added. “We will not get rid of this pandemic until it’s gone everywhere,” he said.