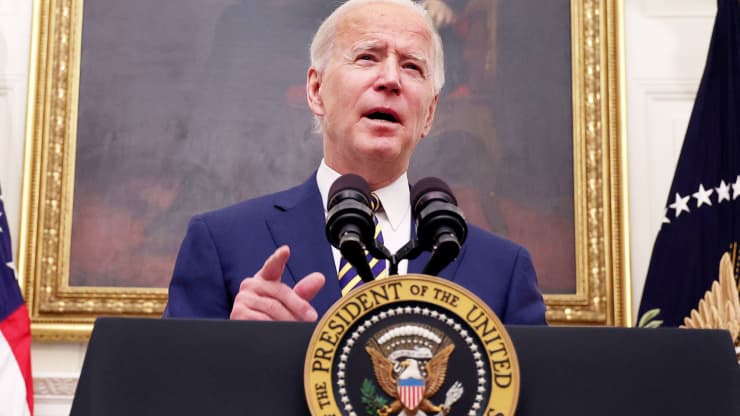 President Joe Biden has painted a bleak picture of the nation’s coronavirus outbreak in his first few days in office, warning that it will take months to turn around the pandemic’s trajectory and that fatalities are expected to dramatically rise over the next few weeks.

“A lot of America is hurting. The virus is surging. We’re 400,000 dead expected to reach well over 600,000,” Biden said on Friday before signing two executive orders designed to reduce hunger and bolster workers’ rights amid the pandemic.

The U.S. surpassed 400,000 total Covid-19 deaths on Tuesday, with a quarter of those coming over the previous 36 days, according to data compiled by Johns Hopkins University. On Biden’s first full day as president on Thursday, he told reporters following a meeting with his Covid-19 advisors, including Dr. Anthony Fauci, that the nation would likely top 500,000 Covid-19 deaths in February.

Biden warned on Friday that as the outbreak continues, “there’s nothing we can do to change the trajectory of the pandemic in the next several months.” The president has repeatedly warned that the situation is likely to worsen before it improves.

A spokesperson for the Biden administration was not immediately available for comment regarding the president’s projections.

The United States has reported a decline in Covid-19 cases in recent days, a glimmer of hope following a surge since the fall and through the winter holiday season. The U.S. is reporting an average of roughly 187,593 new Covid-19 cases daily, a 22% decline compared with a week ago, according to a analysis of Johns Hopkins data.

However, the nation is still “in a very serious situation,” Fauci said during his first White House press briefing appearance under the new administration on Thursday, noting the country’s high death toll and strained hospital capacity.

Fauci said that the daily number of cases, based on a weekly average, appears to be plateauing and turning around. It’s possible that the dip could still be because of a reduced reporting following the holidays, he added.

“When we see that, we think it’s real,” Fauci said.

Biden’s warnings come as the country races to administer 100 million Covid-19 vaccine shots within the first 100 days in his administration. The nation’s vaccine rollout has been slow to start, though health experts have said that Biden’s 100 million shots goal is doable.

The pace of vaccinations have picked up over the last week. The U.S. has administered 1.6 million Covid-19 vaccines between Thursday and Friday, according to recent data from the Centers for Disease Control and Prevention, suggesting that 100 million shots in 100 days would be a feasible goal if that daily count continues.

Biden has dismissed the idea that the goal might be too low of a threshold, claiming that he was told before he took office that the aim might be too high. Biden’s spokesperson didn’t respond to question regarding the president’s comments.

“I find it fascinating that yesterday the press asked the question, ‘Is 100 million enough?’ The week before they said, ’Biden, are you crazy? You can’t do 100 million in 100 days,” the president said during the Friday press briefing. “We’re, God willing, not only going to do 100 million, we’re going to do more than that.”