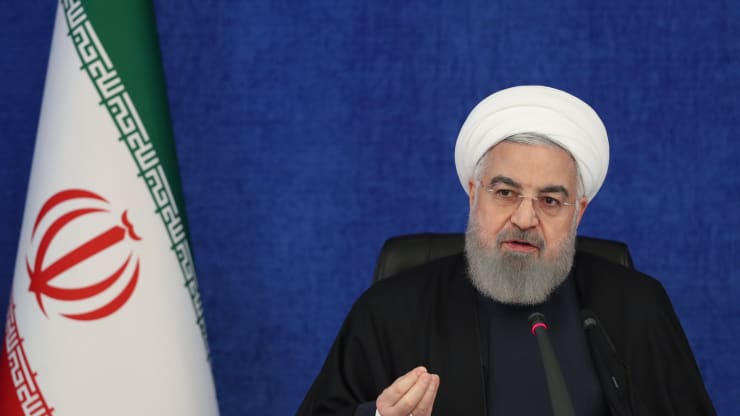 ‘A dangerous game of chicken’: Iran sets up challenge for Biden with nuclear ramp-up

Within the first week of the year, the country had seized a South Korean tanker in the Strait of Hormuz and announced its return to 20% uranium enrichment, a massive breach of the 2015 nuclear deal it signed with world powers.

The tanker seizure, Iran says, is in response to South Korea holding $7 billion of its cash, frozen as a result of U.S. sanctions the Trump administration imposed on Iran after pulling out of the deal in 2018. South Korea’s foreign minister arrived in Tehran on Sunday to discuss the tanker’s release.

The moves are sure to create a headache for the incoming Biden administration, whose top officials never wanted the nuclear deal — officially known as the Joint Comprehensive Plan of Action, or JCPOA — to be abandoned in the first place.

What does 20% enrichment mean?

Just how important is that 20% nuclear enrichment figure? For starters, 20% constitutes highly-enriched uranium and was the level at which Iran was enriching uranium between 2010 and 2013, before the JCPOA was agreed. Its activities led Iran to be hit with the toughest sanctions ever coordinated by the U.S. and EU together.

Under the nuclear deal, by contrast, Iran was only allowed to enrich to 3.67% U-235. U-235 is the isotope of uranium that can sustain a fission chain reaction.

“Iran appears to be trying to maximize its leverage with the Biden administration in the hope that the U.S. will agree to re-enter, rather than attempt to renegotiate, the JCPOA,” Anne Harrington, professor of international relations and a specialist in nuclear non-proliferation at Cardiff University in Wales.

A recent law passed by Iran’s hawkish Parliament — over the objections of Iranian President Hassan Rouhani’s government — mandates that Iran ramp up its nuclear program on multiple fronts.

Behnam Ben Taleblu, a senior fellow at the Foundation for Defense of Democracies, shared Harrington’s prediction. “By upping the nuclear ante, Tehran is hoping to create a crisis, a crisis which it hopes the U.S. will defuse with premature sanctions relief.”

The minimum threshold for a crude nuclear weapon is 400kg of uranium enriched to 20% U-235 — but weapons grade uranium is 90% U-235, nuclear experts told CNBC. Still, they explained, reaching 3 to 4% enrichment equates to roughly two-thirds of the work done toward that 90% figure, as any increases beyond that amount disproportionately speed up breakout time.

And while Tehran currently still allows IAEA inspections of its nuclear sites, the new law mandates that the government halt the inspections by the U.N. watchdog by February if sanctions aren’t lifted.

“The fact that the more hawkish Iranian parliament is able to push through a law mandating that Iran expand its nuclear program on multiple fronts is worrying,” Harrington said. “At its worst, this strategy could exacerbate tensions and result in a dangerous game of chicken.”

Iran has long argued that its nuclear development is only for peaceful purposes, and has defended its incremental breaches of the JCPOA’s parameters since July 2019 as a response to U.S. sanctions that have crippled the Iranian economy.

The moves are “a marker of how comfortable the regime is with taking risks,” said Ben Taleblu. “This is also a leverage-seeking exercise in advance of the upcoming political transition in Washington.”

Despite the aggressive nuclear ramp-up this month, “as Iranian Foriegn Minister Javad Zarif emphasized in remarks earlier this month, these actions are reversible,” Harrington noted. “If the U.S. and Europe come back into compliance with the JCPOA, Iran will too.”

Still, everything could change when Iran votes to elect a new president in June.

Biden has expressed his aim to return to some form of the 2015 deal; some of his top foreign policy picks were the original negotiators and architects of the deal. But Tehran is not likely to make it an easy return, demanding compensation for the economic damage it suffered under the last few years of sanctions and other U.S. concessions.

“This is a double edged sword, both for the Iranians and the Biden administration,” said Sanam Vakil, deputy head of Chatham House’s MENA Program. The Iranians are wary of returning to the table too quickly, while for Biden, “the optics are quite difficult to justify giving in to the Islamic Republic and giving in to pressure tactics, particularly in light of the past criticism of the deal.”

By ramping up the leverage with the nuclear moves and the South Korean tanker seizure, “Iran wants to remind the international community, and particularly the Biden administration, that Iran doesn’t only have the diplomatic path,” Vakil said.

“There is this impulse inside the country to use pressure to extract concessions.”

Do you want to make the most of your money?  Open a bank account in Vanuatu today!  Enjoy regulation-free bank accounts by opening a corporate and/or a personal bank account and see all Vanuatu has to offer.  #topcompanyformation.com