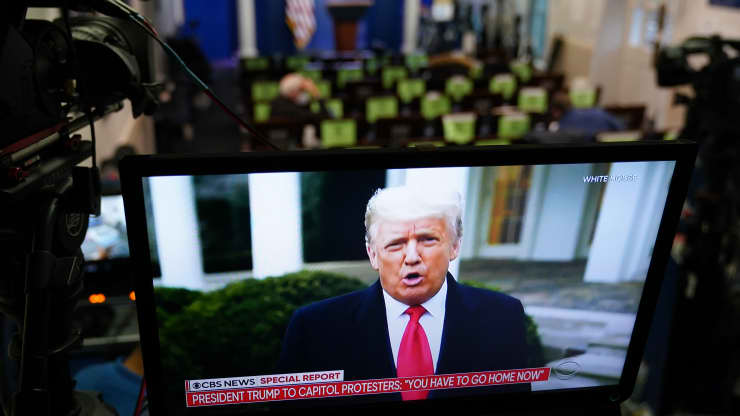 President Donald Trump is now promising an “orderly transition” of power, tweeting through a surrogate early Thursday minutes after Congress formally confirmed the election of Joe Biden as president following an hourslong takeover of the Capitol by a mob of Trump supporters.

A statement from the president on Twitter via deputy chief of staff for communications Dan Scavino repeated baseless claims of widespread voter fraud, but included the reversal.

“Even though I totally disagree with the outcome of the election, and the facts bear me out, nevertheless there will be an orderly transition on January 20th. I have always said we would continue our fight to ensure that only legal votes were counted. While this represents the end of the greatest first term in presidential history, it’s only the beginning of our fight to Make America Great Again!”

The statement followed dramatic scenes on Capitol Hill on Wednesday, with pro-Trump supporters storming the building, forcing a lockdown and lawmakers to seek shelter.

Late Wednesday, Congress reconvened and formally confirmed the election of Biden after 3:30 a.m. ET. The affirmation came after the House and Senate voted overwhelmingly to reject efforts by some Republicans to object to the acceptance of Electoral College wins for Biden in Arizona and Pennsylvania.

Outside the White House on Wednesday, Trump urged his supporters to march on the Capitol, which resulted in the mayhem.

Scenes of angry pro-Trump protesters gathered on the steps of the Capitol before pouring into the building and sweeping through the halls of Congress, sitting at lawmakers’ desks and posing for photos, draped in pro-Trump flags and merchandise, have shocked the world.

Biden condemned the storming of the Capitol, saying he was “shocked and saddened” by what he described as an insurrection.

“This is not dissent. It’s disorder. It’s chaos. It borders on sedition and it must end now,” the Democratic president-elect said in an address Wednesday, as he called on Trump to tell his supporters to go home.

Trump later tweeted a video in which he told supporters “you have to go home now” but again repeated false claims the election was stolen, leading to his Twitter account being temporarily frozen.