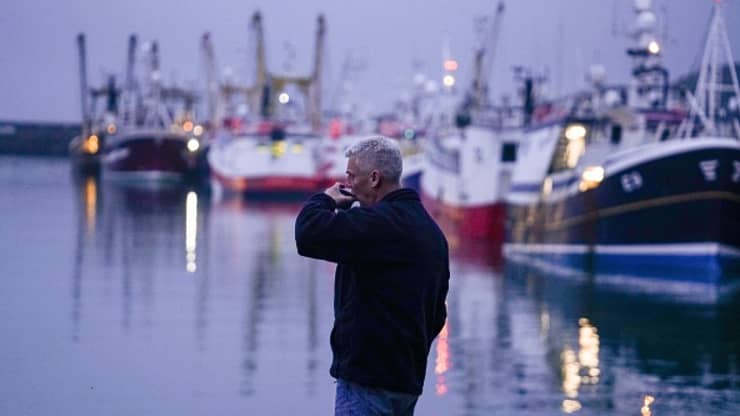 LONDON — The Irish foreign minister said a post-Brexit trade deal is expected Thursday, after a “last-minute hitch” delayed an announcement.

Simon Coveney told RTE radio it will be an “enormous relief” when the deal is finally announced. Press conferences originally slated for early Thursday have been delayed as both sides finalize the “small text” of the agreement on fishing rights, he said.

The British currency continued its move higher Thursday as the long-awaited trade agreement looked increasingly likely. Sterling was trading around 0.8% higher against the dollar at 1.3599 Thursday morning.

The FTSE 100 rose 0.5% when markets opened, but slipped into the red as the morning progressed.

Officials on both sides said on Wednesday that they were optimistic about the chances of a deal, but that issues remained.

Meanwhile, EU Chief Brexit Negotiator Michel Barnier said Tuesday that the bloc was making a “final push” to strike a Brexit trade deal with Britain ahead of Dec. 31.

“We are really in a crucial moment,” Barnier told reporters on his way to brief 27 ambassadors. “We are giving it a final push. In 10 days, the U.K. … will leave the single market.”

The yields on U.K. and U.S. government bonds dipped on Thursday after rising sharply the day before on hopes of a deal. Bond yields move inversely to prices.

A deal has remained elusive in recent weeks because of strong disagreements over fishing rights, and several other issues.

A fish merchant sips coffee in the early morning at the Newlyn Fish Market on December 22, 2020 in Newlyn, England. Fishers there are preparing for new rules on the export of their fish to the EU.
Hugh Hastings | Getty Images | Getty Images

There are concerns that some fishing fleets could ignore any restrictions, leading to potential clashes. These are not unheard of; there have been physical skirmishes, dubbed the “Scallop wars,” between British and French fishing fleets in recent years amid disputes over fishing.

If Britain and the EU fail to agree on a deal by Dec. 31 then both sides could impose border checks and import taxes on each other’s goods, as trade will revert to World Trade Organization terms. This could lead to price changes in supermarkets and shops.

Britain officially left the European Union on Jan 31., 2020, however leaders were given 11 months to agree on the rules that will dictate life for the U.K. and Europe after Brexit.

Looking to open an offshore bank account?  Give Vanuatu a try.  Open a personal and/or corporate bank account today.  Easy to do.  Watch your money grow.  Vanuatu is a haven for investors.  Learn more at #topcompanyformation.com