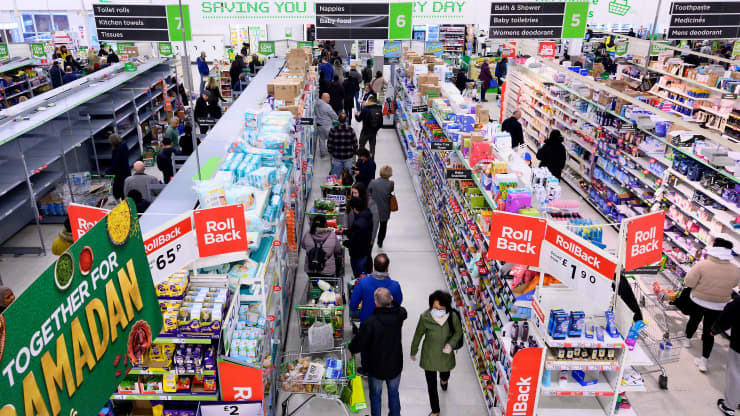 British grocery stores are stockpiling food amid the possibility of a no-deal scenario as Brexit trade deal negotiations between the EU and U.K. go down to the wire.

The supermarkets have reportedly been told by government ministers to hoard non-perishable goods, according to the Sunday Times newspapers, with lawmakers saying a “no-deal Brexit is on the cards.” A spokesperson for the U.K. government was not immediately available for comment.

There have already been widespread warnings from business leaders about possible fresh food shortages, possible delays to deliveries from the continent and price rises in the event of a no-deal scenario — where the U.K. and EU fail to agree a post-Brexit trade deal.

Both sides have until December 31 to agree a deal, and although talks are continuing at this late stage, they have warned that a no-deal is the likelier outcome.

There were glimmers of hope on Sunday, however, when British Prime Minister Boris Johnson and European Commission President Ursula von der Leyen agreed to “go the extra mile” and instructed their negotiators to keep on talking.

The food retail industry is watching negotiations closely but leading chains have already taken steps to mitigate a no-deal situation.

Online grocer Ocado is stockpiling long-life products such as Italian beer, according to a report last week, while the chairman of Tesco said that his business was “trying to ensure as much as we can that we stockpile long life products either in our warehouses or with our suppliers.”

Speaking to Bloomberg, John Allan said higher food prices were “unavoidable” in the event of a no deal and warned that food bills could rise 3-5% on average from Jan. 1.  Some food products, such as continental cheeses, could see much larger price rises in the event of tariffs being imposed too, he said, although he urged shoppers not to panic buy.

“We may see some shortages of fresh foods, particularly short-life fresh foods. I think that will only be for a limited period, perhaps a month or two, before we get back to normal,” Allan said.

Dominic Raab, the U.K.’s foreign secretary, rebuffed the comments from Tesco’s chairman, telling the BBC last Thursday that he wasn’t concerned about price rises. “Of all the things that will be a challenge, I am not concerned about either supermarket cupboards running bare or the cost of food prices,” he said, although he conceded there would be “some bumps along the road if we don’t get a free trade deal.”

There are fears the uncertainty over a deal could prompt panic buying among consumers.

In a no-deal scenario, the current no-tariff trading relationship between the U.K. and EU would end abruptly on Dec. 31 and both sides would default to World Trade Organization rules. Both sides could then levy tariffs on each other’s imports, pushing up the cost of doing business and leading to higher prices for consumers.

The British Retail Consortium said that businesses were trying to prepare for a no-deal situation, while warning consumers against stockpiling goods.

“Retailers are doing everything they can to prepare for all eventualities on 1st January — increasing the stock of tins, toilet rolls and other longer life products so there will be sufficient supply of essential products,” Helen Dickinson, chief executive of the BRC, said in a statement Sunday.

“While no amount of preparation by retailers can entirely prevent disruption there is no need for the public to buy more food than usual as the main impact will be on imported fresh produce, such as fresh fruit and vegetables, which cannot be stored for long periods by either retailers or consumers,” she said.

The BRC warned that, without a deal, the British public will face over £3 billion ($4.02 billion) in food tariffs and have said that retailers would “have no choice but to pass on some of these additional costs to their customers who would see higher prices filter though during 2021.” Moreover, it said new checks and red tape that will apply from Jan. 1 will create an additional burden for retailers and their customers.

Like other sectors that could be sorely affected by a no-deal outcome, such as car manufacturing, the BRC has called on the U.K. and EU to “do what is necessary to agree a zero-tariff agreement, or else it will be the public that pay the price of this failure.”

Probable higher food prices and disruption to stocks would come after an already difficult year for consumers given the coronavirus pandemic, and would put extra strains on household finances.

The lifting of regional coronavirus restrictions for Christmas is also likely to put a higher demand on supermarkets for goods too. This at a time when there has been delivery problems due to blockages at one of Britain’s largest ports, in Felixstowe on the eastern coast of England, reportedly due to a backlog of containers of personal protective equipment.