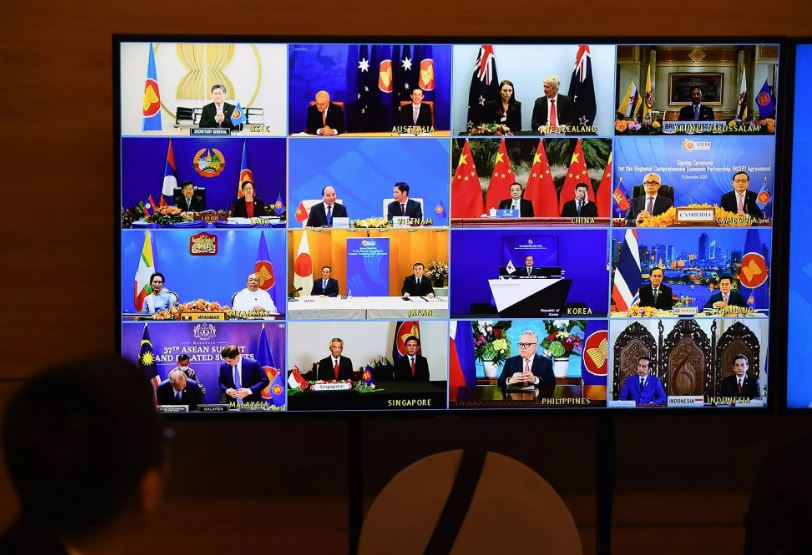 China is not an ‘expansionist empire,’ state media says after signing of mega trade deal

Chinese state-backed tabloid Global Times claimed on Sunday that the signing of the world’s largest trade deal over the weekend proves that China is not the “expansionist empire” that the U.S. and Western countries have made it out to be.

Instead, the mega pact — the Regional Comprehensive Economic Partnership or RCEP — showed that China can work with other countries “in an effective and mutually beneficial way,” the tabloid said on Sunday.

“This is the fundamental way for China’s development. China has been seeking a win-win and all-win mode from the very beginning and, like rolling snowballs, has accumulated a large number of common interests around the world,” said the Global Times in an opinion piece posted on its website.

Ideas such as so-called “decoupling” with China are nonsense, and the RCEP illustrates that nations who pursue such are likely to end up on the outside of the world’s economic gravity.
CGTN

“Some US and Western elites are indeed behind the times in their way of thinking — they think of China as an ‘expansionist empire’ and see all China’s expanded cooperation with whichever country or region as part of its ‘expansion strategy.’ In fact, they have really misread China, the times as well as the world,” it added.

RCEP, which covers nearly one-third of the global economy and the world’s population, was signed by China and 14 Asia-Pacific countries on Sunday. The other 14 participating economies are the 10-member Association of Southeast Asian Nations (ASEAN), Japan, South Korea, Australia and New Zealand.

Similarly, CGTN — the international arm of state-controlled broadcaster CCTV — said China defied the portrayal of “Western media” by showing that Beijing’s approach to the region is not “aggression,” but “well contemplated diplomacy.”

Chinese state media act as a mouthpiece for the Chinese government.

“In addition, what the West should understand is that China is integral and core to the regional and global economy, and that this trade pact is an affirmation of that,” CGTN said in an opinion piece published Sunday on its website.

“Ideas such as so-called ‘decoupling’ with China are nonsense, and the RCEP illustrates that nations who pursue such are likely to end up on the outside of the world’s economic gravity,” it added, making a reference to the U.S. and Chinese economies splitting due to their trade and tech conflict.

CGTN highlighted other trade agreements that Beijing has negotiated since U.S. President Donald Trump took office in January 2017. Under Trump, the U.S. slapped punitive tariffs on several of its major trading partners, including China, Canada and the European Union.

In contrast to the U.S., China clinched new agreements with Cambodia as well as the Eurasian Economic Union comprising Russia, Belarus, Kazakhstan, Armenia and Kyrgyzstan, said the broadcaster. China also upgraded existing trade deals with New Zealand and Singapore, it said in defense of Beijing.

Those deals would “diminish American attempts to decouple China from the global economy,” it said.

“China has in effect responded to the American challenge, not through confrontation as the media sensationalize it to be, but through deepening its integration with others and staking out its trade future,” said CGTN.

“The RCEP includes multiple U.S. allies; their agreement to the deal is an affirmation that China will remain an intrinsic economic partner for them and that the region will ultimately work and cooperate together,” the state-owned broadcaster said.