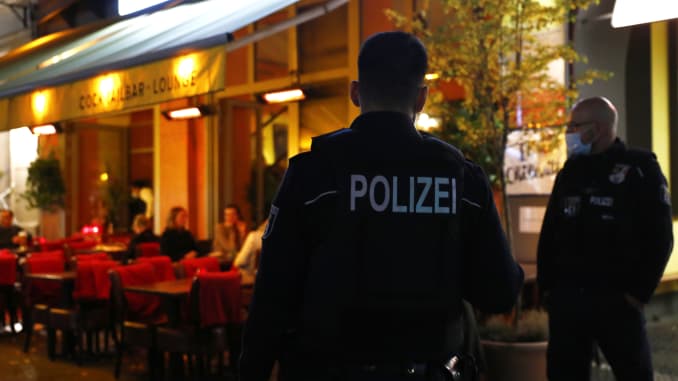 There’s further economic pain ahead for European countries as France and Germany announce new nationwide lockdowns and other governments consider doing the same.

The latest measures to address the second wave of Covid-19 infections in Europe could lead to higher unemployment, the permanent closure of many businesses and even more national debt.

“Scarring will occur with each iteration,” analysts at High Frequency Economics said in note on Wednesday about the new lockdowns.

“Businesses and households will fail, increasing the number of jobs that will never come back at any interest rate and with any level of fiscal stimulus.”

French President Emmanuel Macron announced Wednesday a second nationwide lockdown starting Friday, with only schools and factories remaining open — in contrast to March, when these were also shut.

The decision delivers a new blow to restaurants, bars, cinemas and retailers, many of which were only just starting to get back on their feet.

“The shock is terrible especially for small and medium-sized firms, which are getting closed in the most important time of the year, before (the) holidays,” Tomasz Michalski, professor of economics at HEC Paris business school, told via email.

“In many of these (businesses), most yearly sales take place in the last quarter of the year. Their business will be taken away again by supermarkets and huge online retailers.”

Online shopping shot up during the first lockdowns across Europe, when consumers, stuck at home, relied on delivery services for everything from groceries to leisure and homewares.

“French GDP (gross domestic product) now looks set to decline significantly in the fourth quarter, possibly by 3 to 4%,” analysts at Berenberg said in a note on Thursday.

The French statistics office said earlier this month — before news of the latest lockdown — that it expects economic activity to settle at “5% below its pre-crisis level” during the third quarter of the year, after contracting by almost 15% in the second quarter.

German Chancellor Angela Merkel announced on Wednesday a “light lockdown,” which will close bars, restaurants, gyms, cinemas and theatres as of next week.

In addition to keeping schools open, as well as hotels for business travelers, Germany is also allowing shops to operate, though with limited customer numbers.

“The lockdown measures should result in a fourth-quarter GDP decline of at least 0.5% quarter-on-quarter. In particular, hospitality and cultural institutions will suffer most, again,” analysts at Deutsche Bank said in a note on Thursday.

Data from the German statistics office, Destatis, showed earlier this month that the restaurant industry experienced a more-than 40% drop in turnover between March and August in comparison with the same period a year earlier.

Germany has weathered the economic crisis relatively well to date, in comparison with its European peers. This is in part due to large amounts of fiscal stimulus, but also to its manufacturing sector, which has outperformed the services industry.

However, even that could be at risk.

France and Germany aren’t the only European governments to be mulling new restrictions as infections grow. Belgium, Spain, Italy, Czech Republic and Portugal — to name but a few — have also announced new steps over the past few weeks to contain the spread. They have, for now, avoided to announce new nationwide lockdowns.

In the U.K., where certain regions are already under lockdown, a government minister said Thursday that the cabinet was working to avoid imposing a lockdown for the whole of England, Reuters reported.

“When the economy is shuttered, either by policy or by the virus directly, income is lost … forever. We are all subsequently poorer,” analysts at High Frequency Economics said.