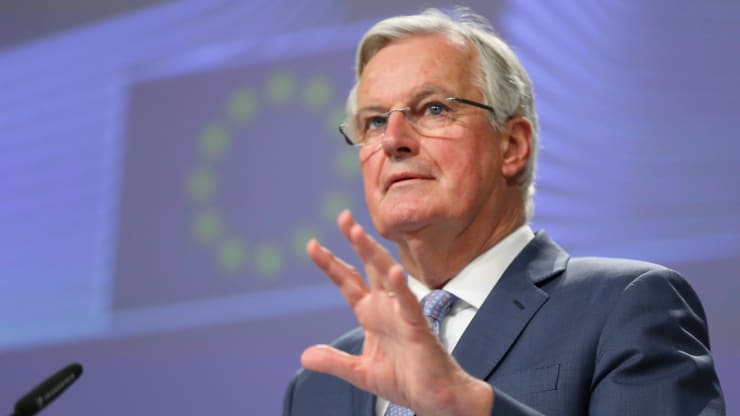 Sterling jumped more than 0.8% against the U.S. dollar on Wednesday after the EU signaled that a trade deal with the U.K. is still possible.

“Despite the difficulties we’ve faced, an agreement is within reach if both sides are willing to work constructively, if both sides are willing to compromise and if we are able to make progress in the next few days on the basis of legal texts and if we are ready over the next few days to resolve the sticking points, the trickiest subjects,” the EU’s chief negotiator Michel Barnier told the European Parliament.

His comment provided traders with some optimism that a trade deal between the U.K. and the EU will be reached even though their negotiations have been stuck over the same three issues for months.

On Friday, U.K. Prime Minister Boris Johnson struck a gloomy tone when warning exporters to prepare for a no deal with the EU. A spokesperson for the government went further on the same day saying that European negotiators did not need to travel to London this week if the EU wouldn’t change its approach to the talks.

British officials were disappointed late last week when European leaders called on the U.K. “to make the necessary moves to make an agreement possible.”

These tensions have halted the negotiations, but the EU has now said it is ready to return to the table as soon as the U.K. government chooses to do so too.

“We will seek the necessary compromises on both sides in order to do our utmost to reach an agreement and we will do so up until the very last day that it is possible to so do,” Barnier told lawmakers on Wednesday.

“Our doors will always remain open until the very end but … we will remain firm,” he added.

The U.K. ceased its EU membership in January but it’s following EU rules until the end of the year so both sides can work on new trade arrangements. These will be different from the zero-tariff regime in place at the moment. Failure to develop new trade rules will mean that exporters will face higher costs and barriers when selling goods between the two blocs.

U.K. government minister Michael Gove told Sky News on Sunday that there was a less than 50% chance of a deal being reached. Earlier this month, he had assigned it with a 66% probability. Negotiators have yet to find compromises over fisheries, competition rules and the future oversight of their potential deal.

In addition, the EU has said that it will not sign any new trade deal while the U.K. government does not fully comply with the Withdrawal Agreement, which they signed earlier this year and which paved the way for the U.K.’s departure from the bloc. The government in London put forward a bill that overrides parts of these previous accords and the EU has demanded that the upcoming legislation is corrected to respect their previous deal.

Getting jobs to do press releases and other written freelance jobs is available when you sign up with TOP platform as a journalist. If you have experience as a journalist and interest in finding new jobs around the world, TOP is the best place to think about becoming a client with. Once you sign up with TOP then you can become involved with doing press releases for others and offering other services.