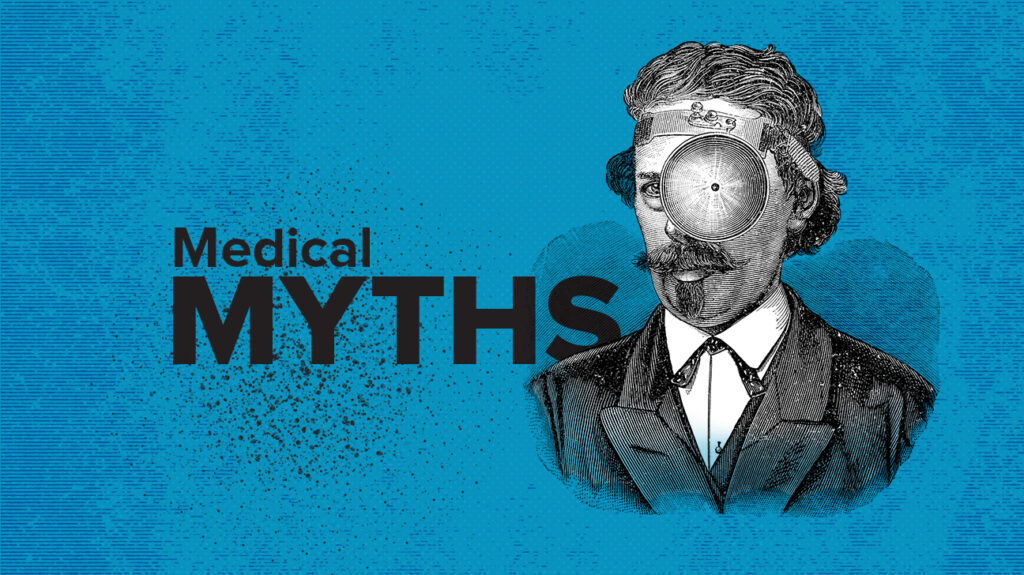 Over recent years, mental health has slowly moved out of the shadows. After centuries of being sidelined, our state of mental well-being is gradually receiving more of the attention that it deserves. However, many myths persist. Here, we address 11 common misconceptions.

As we approach World Mental Health Day on October 10, this edition of Medical Myths will focus on mental health.

Although the topic receives increasing attention and research, there are still many myths and misconceptions associated with mental health.

Sadly, there is still a significant stigma attached to mental health conditions, with much of this relying on old-fashioned thinking and outdated assumptions. As with many things in life, the more information we are armed with, the less likely we are to allow myths to color our opinions.

In the not-so-distant past, society shunned people with mental health conditions. Some people believed that evil spirits or divine retribution were responsible for mental illness. Although this way of thinking has been extricated from society in much of the world, it still casts a long shadow.

As 2020 continues unabated, the mental health of the world has taken a beating. Addressing untruths relating to our mental well-being is more pressing than ever.

Below, we explore 11 common misconceptions regarding mental health.

In 2001, the World Health Organization (WHO) estimated that “1 in 4 people in the world will be affected by mental or neurological disorders at some point in their lives.”

Currently, 450 million people are experiencing such conditions. As the WHO explain, mental disorders are “among the leading causes of ill health and disability worldwide.”

One of the most common mental health disorders is depression, affecting more than 264 million people globally in 2017. A more recent study, which concentrates on the United States, concludes that the number of adults experiencing depression has tripled during the pandemic.

Generalized anxiety disorder (GAD), another common mental disorder, affects an estimated 6.8 million adults in the U.S., equating to more than 3 in every 100 people.

2. Panic attacks can be fatal

Panic attacks are incredibly unpleasant, involving a racing heartbeat and an overriding sense of fear. However, they cannot directly be fatal.

It is worth noting, though, that someone who is having a panic attack might be more liable to have an accident. If someone is experiencing a panic attack or can feel one coming on, finding a safe space can help mitigate this risk.

An old but persistent myth is that people with mental health issues cannot hold down a job or be useful members of the workforce. This is entirely false.

It is true that someone living with a particularly severe mental health condition might be unable to carry out regular work. However, the majority of people with mental health issues can be as productive as individuals without mental health disorders.

When the researchers looked at the effect of age, they found that the employment gap between people with a mental health condition and those without widened with advancing age. In people aged 18–25 years, the difference in employment rates between those with and without a serious mental illness was just 1%, but in the 50–64 bracket, the gap was 21%.

This is no more true than saying that a broken leg is a sign of weakness. Mental health disorders are illnesses, not signs of poor character. Similarly, people with, for instance, depression, cannot “snap out of it” any more than someone with diabetes or psoriasis can immediately recover from their condition.

If anything, the opposite is true: Fighting a mental health condition takes a great deal of strength.

Ask the experts about the future of healthcare at a Live Town Hall hosted by our sister site, Healthline, featuring healthcare policy experts and patient advocates.

5. Only people without friends need therapists

There is a large difference between structured talking therapies and speaking with friends. Both can help people with mental illness in different ways, but a trained therapist can address issues constructively and in ways that even the best of friends cannot match.

Also, not everyone can open up entirely in front of their nearest and dearest. Therapy is confidential, objective, and entirely focused on the individual, which is not generally possible in more informal chats with untrained friends.

Plus, some people do not have close friends. There are many possible causes of this, and it is no reason to look down on someone.

A mental health diagnosis is not necessarily a “life sentence.” Each individual’s experience with mental illness is different. Some people might experience episodes, between which they return to their version of “normal.” Others may find treatments — medication or talking therapies — that restore balance to their lives.

Some people may not feel as though they have fully recovered from a mental illness, and some may experience progressively worse symptoms.

However, the take-home message is that many people will recover to a greater or lesser degree.

It is also important to consider that “recovery” means different things to different people. Some might view recovery as a return to exactly how they felt before symptoms began. For others, recovery might be relief from symptoms and a return to a satisfying life, however different it may be.

“Recovering from mental illness includes not only getting better but achieving a full and satisfying life. Many people affirm that their journey to recovery has not been a straight, steady road. Rather, there are ups and downs, new discoveries, and setbacks.” They continue:

“The journey to full recovery takes time, but positive changes can happen all along the way.”

7. Addiction is a lack of willpower

This statement is not true. Experts consider drug use disorders to be chronic diseases.

A paper in Addictive Behaviors Reports outlines a qualitative longitudinal study investigating the relationship between willpower and recovery from addiction. The researchers found that a lack of willpower was not the deciding factor when it came to beating addiction. They write:

“People with addiction seem not to be short on willpower; rather, recovery is dependent on developing strategies to preserve willpower by controlling the environment.”

8. People with schizophrenia have a split personality

This is a myth. Schizophrenia means “splitting of the mind,” which might explain the misconception. However, when Eugen Bleuler coined the term in 1908, he was trying to “capture the fragmentation and disintegration of the mind and behavior as the essence of the disorder.”

According to the WHO, schizophrenia “is characterized by distortions in thinking, perception, emotions, language, sense of self, and behavior.” These distortions can include hallucinations and delusions.

Schizophrenia is not the same as dissociative identity disorder, which used to be called multiple personality disorder.

There is a stereotype that eating disorders are the domain of young, white, wealthy females. However, they can affect anyone.

For instance, a study that investigated the demographics of eating disorders over a 10-year period found that they are shifting. The most significant increases in prevalence occurred among males, individuals from lower income homes, and people aged 45 years or older.

According to other research, males currently account for 10–25% of all cases of anorexia and bulimia nervosa, as well as 25% of cases of binge eating disorders.

10. Eating disorders are a lifestyle choice

This is a harmful myth. Eating disorders are serious mental health conditions, and, in extreme cases, they can be fatal.

11. All people with a mental illness are violent

This, of course, is a myth. Thankfully, as the world becomes more aware of mental health conditions, this misconception is slowly dying away. Even individuals who are experiencing the most serious conditions, such as schizophrenia, are mostly nonviolent.

It is true that some people with certain mental illnesses can become violent and unpredictable, but they are in the minority.

The authors of a review that investigates the links between mental health and violence help explain why this myth might have gained traction over the years:

“Violence attracts attention in the news media […]. Violence in the context of mental illness can be especially sensationalized, which only deepens the stigma that already permeates our patients’ lives.”

The authors of the review conclude that “individuals with mental illness, when appropriately treated, do not pose any increased risk of violence over the general population. […] The overall impact of mental illness as a factor in the violence that occurs in society as a whole appears to be overemphasized.”

Although there certainly is a relationship between violence and mental illness, one author explains, “Members of the public exaggerate both the strength of the association between mental illness and violence and their own personal risk.”

In a commentary that appears in The Lancet, Sir Graham Thornicroft, a professor of community psychiatry at King’s College London in the United Kingdom, discusses the public health implications of this thorny matter. Outlining the inherent oversimplification that this myth implies, he writes:

“People with mental illness are much more often the victims of violence rather than the perpetrators.”

He continues, “However, people with some types of mental disorder are more likely to be violent than others in the general population — a fact that is uncomfortable for many in the mental health sector.”

“While there is little evidence to suggest that people with mental illness in general (usually those with diagnoses of depression or anxiety disorders) have any increased risk of perpetrating violence compared with the general population, higher rates of violence perpetration have been identified among people with particular types of severe mental illness, namely schizophrenia and bipolar disorder.”

However, Sir Thornicroft explains that these rates are only moderately raised compared with the general population. He writes that rates of violence are significantly raised in people who have “triple morbidity,” for instance, individuals with a severe mental disorder, a substance use disorder, and an antisocial personality disorder.

In summary, mental health conditions are common, but treatment is available. We must all work together to remove the myths and stigma attached to mental disorders. Although society’s understanding of mental health issues has come on leaps and bounds compared with just a decade ago, we still have mountains to climb.