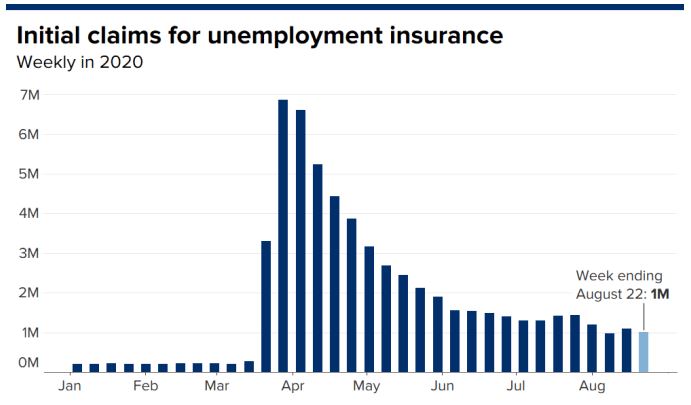 The U.S. economy looks set to rebound in the current quarter from the previous three months’ deep contraction — but it could sink again if the coronavirus outbreak is not managed well, warned a former Federal Reserve official.

Dennis Lockhart, president of the Atlanta Fed from 2007 to 2017, was among economists and experts who have raised the possibility of a “double-dip” recession in the U.S. economy. A double dip means an economy returning to a period of decline after a brief recovery.

“I continue to believe that looking forward you have to consider a range of scenarios and among those scenarios would be, obviously, a pessimistic one and that could be a double dip,” Lockhart told “Squawk Box Asia” on Friday.

“If things go badly with the management of the virus and there’s more cascading — which (Thursday’s) numbers of initial claims might suggest — then yes, it’s possible we have a double dip. I don’t think that’s probably the base case, but I think it’s still possible.”

Before Lockhart, other prominent policymakers and economists who have warned about the possibility of a double dip include Kansas City Fed President Esther George and former Morgan Stanley Asia Chairman Stephen Roach.

‘Fiscal action is the most appropriate’

The U.S. has reported more than 5.8 million confirmed coronavirus cases and over 180,000 deaths — the highest globally, according to data compiled by Johns Hopkins University.

Lockdown measures of varying degrees across the country to contain the outbreak sent the U.S. economy plunging by 31.7% on an annualized basis in the second quarter, said the Commerce Department. That was the country’s worst quarterly fall in gross domestic product on record.

Lockhart said the U.S. economy — which is the world’s largest — needs greater fiscal support because the use of monetary policy is nearing its limits. He explained that the Fed has signaled that interest rates will be kept near zero for “quite some time into the future” with its new approach to inflation, and there isn’t much room for “dramatic increases” in its asset purchase program.

But there’s been a lack of progress as Congress and the White House remain locked in a stalemate over another round of fiscal stimulus, noted the former Atlanta Fed president.

“If there’s going to be an effective effort to really ward off a worst-case scenario, particularly for portions of the American public that are most vulnerable, then it’s going to come from the fiscal side,” he said.

“That theme has been repeated several times by Jay Powell and I completely agree that fiscal action is the most appropriate economic action at this time and we need it.”

If you are looking to make some money off of your photography, you should read up on how photographers sell photos online. Whether you are interested in how to sell personal photos online or how to sell other kinds of photos, you’d be surprised by the demand that can be found out there, which in turn, can enable you to make a tidy sum off of your efforts.