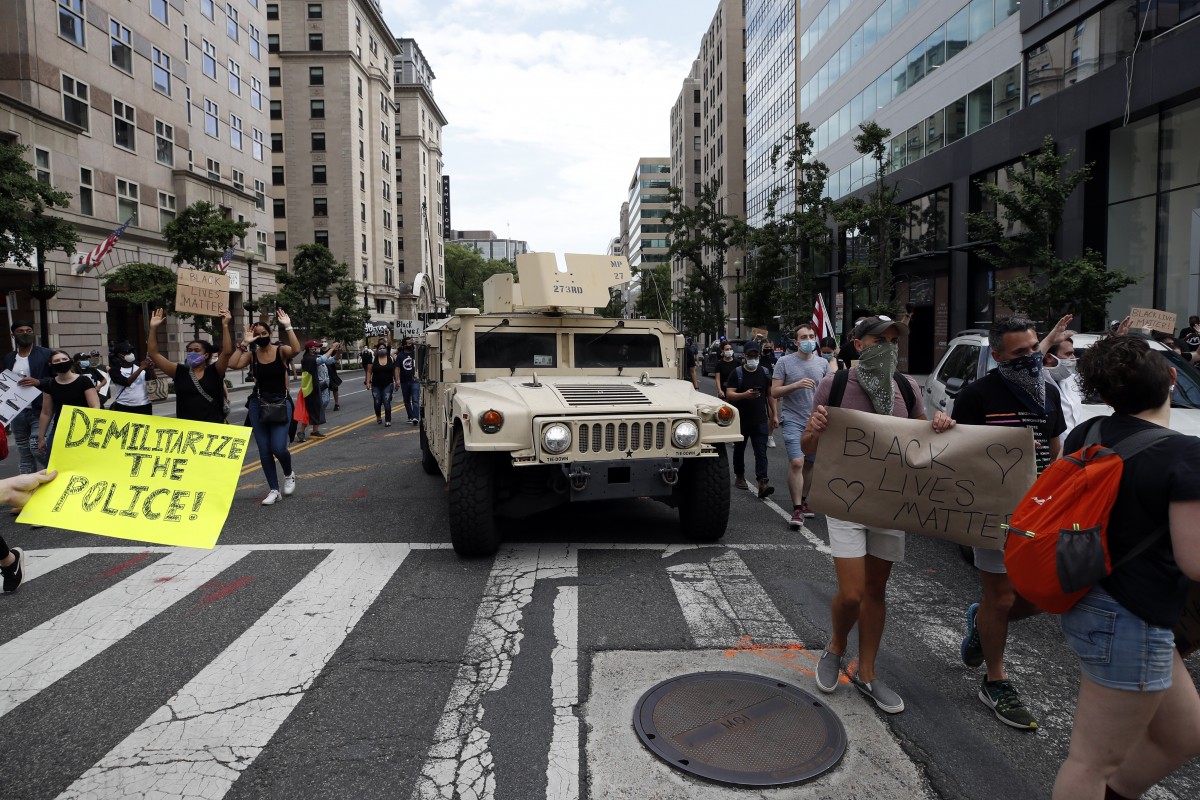 Amid US protests, Pentagon officials on edge over military leaders’ dealings with Trump

This story is published in a content partnership with POLITICO. It was originally reported by Lara Seligman and Bryan Bender on  politico.comon June 2, 2020

The optics this week are putting people inside the halls of the Pentagon on edge as images of US troops on the streets of the nation’s capital dominate airwaves across the globe, and as the top brass is increasingly viewed as mixing politics and the military.

Defence Department officials say they are increasingly uncomfortable with the more prominent role the US military is playing in tamping down violent protests breaking out all over the US, and the growing tendency of the president to call on the troops for domestic missions ranging from border security to law enforcement.

“The decision to use active military forces in crowd control in the United States should only be made as a last resort,” said Mick Mulroy, former deputy assistant secretary of defence under President Donald Trump. “Active Army and Marine Corps units are trained to fight our nation’s enemies, not their fellow Americans. American cities are not battlefields.”

The anxiety hit a high point on Monday, when word leaked out that Defence Secretary Mark Esper referred to cities undergoing protests as a “battlespace,” and as Esper and Joint Chiefs Chair General Mark Milley walked with Trump across the street from the White House after protesters were cleared from Lafayette Square in advance of a staged photo op in front of St. John’s Episcopal Church.

For years, top military leadership has tried to minimise the perception that the armed forces are being used by the president for political purposes. Today, the nation is confronting the prospect of civil strife that rivals the racial unrest of the late 1960s in scale, even as civil-military tensions reach levels not seen since the use of National Guard units to respond to anti-Vietnam protests at Kent State university.

The Pentagon sought to limit the role of the active-duty military in carrying out Trump’s desire to use soldiers to police the US-Mexican border. It also successfully pushed back on Trump’s request to hold a large-scale military parade on July 4 last year, instead putting on a muted display of military hardware.

The president is trumpeting his powers as commander in chief as the nation confronts the dual crises of civil unrest over racial injustice and a public health emergency. On Monday, he said he was putting Milley, the nation’s top military officer, “in charge” of restoring order and threatened to invoke the Insurrection Act, an 1807 law that gives him the authority to deploy federal troops to respond to domestic disorder.

Esper and Milley appear to have embraced their new roles, unlike Trump’s first Defence Secretary James Mattis, who resigned in protest of the decision to pull troops out of Syria, and former Chairman General Joseph Dunford, who mostly remained in the shadows and was rarely photographed in public.

The Pentagon was “taken aback” by the president’s comments putting Milley in charge, according to one senior defence official. “There is growing concern that this is not good for the role of the military going forward,” the official said. “Now you’ve injected the military into a moment in a political way. It just doesn’t seem right.”

This account is based on interviews with half a dozen defence officials as well as former officials and outside experts, many of whom spoke on condition of anonymity to discuss a sensitive topic. Multiple Pentagon spokespeople declined to comment on the record.

The scene erupted Monday night after police cleared protesters from Lafayette Square so that Trump could walk from the White House to the church so he could be photographed holding a Bible. Esper and Milley walked with Trump, and Esper posed for the photo as well.

But despite their appearance beside their boss on live television moments after he threatened to send active-duty troops into the heartland to tamp down on violent protests, some defence officials attempted to distance Esper and Milley from Trump’s comments.

The two did not know that local law enforcement would clear the area of demonstrators, said a second senior defence official who spoke on condition of anonymity to discuss a sensitive topic.

Esper and Milley were actually on their way to the FBI’s Washington Field Office on Monday night when they were asked to instead head to the White House to update the president on the protest response, according to the two defence officials.

“While they were there as that meeting concluded, the president indicated an interest in viewing the troops that were outside, and the secretary and chairman went with him,” the second senior defence official said. 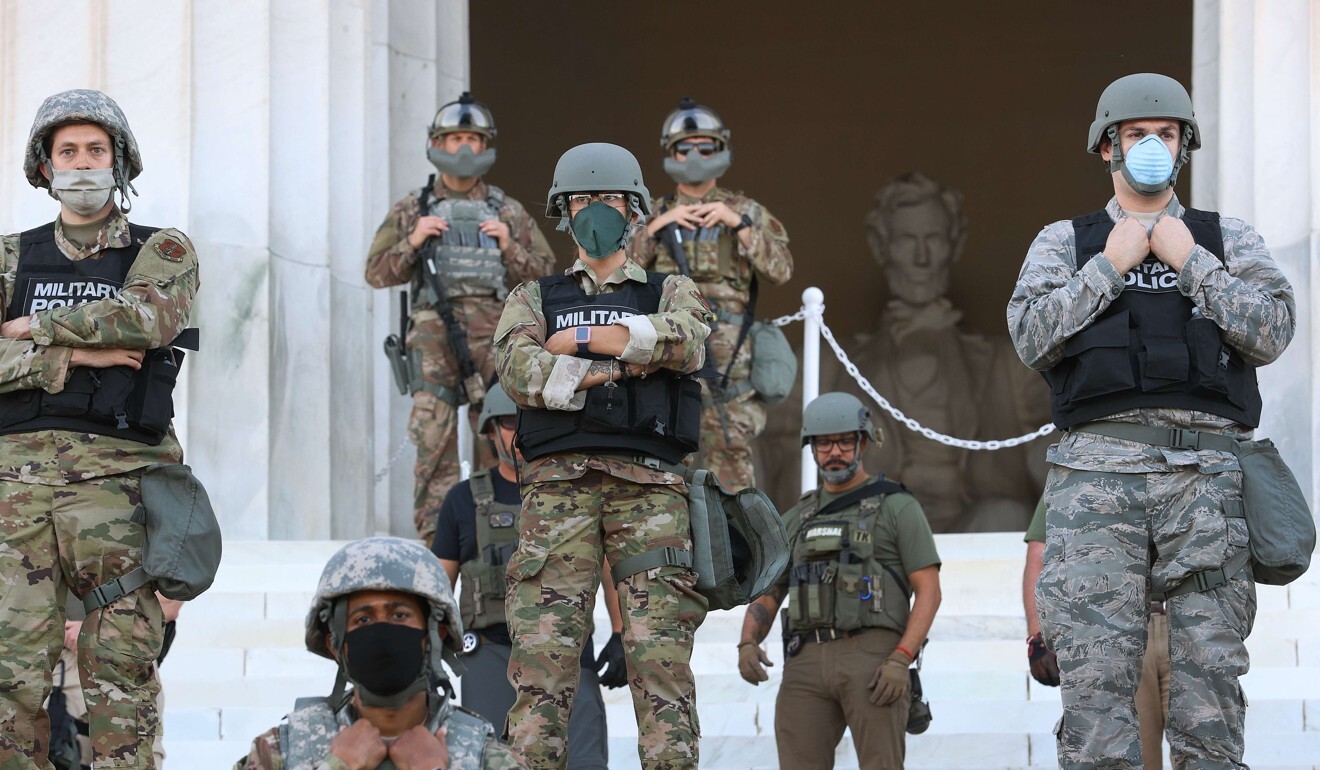 Members of the DC National Guard stand on the steps of the Lincoln Memorial in Washington. Photo: AFP

After the photo, Milley was later filmed walking through the streets in his combat fatigues – a move that has drawn harsh criticism.

“It serves no useful purpose, and perpetuates the message that the military is being put in charge of the overall response; that this is a military, rather than a social or political problem to solve,” said Lindsay Cohn, an associate professor at the Naval War College specialising in civil-military relations.

Another defence official defended the chairman’s choice of uniform, saying he wears his fatigues often in the Pentagon. It didn’t make sense to go back to the Pentagon to change when he was already in the city, the official said.

A fourth defence official who was not authorised to speak publicly said there has been a significant level of consternation among Pentagon officials over the past day that Milley wasn’t more attuned to how his presence could send the wrong message – and muddle the military’s hard-fought reputation as being above the political fray.

“His predecessor did a much better job of staying out of the line of fire,” said the official, referring to Dunford, who stepped down as chairman last year. “Milley went right into the line of fire.”

James Miller, a former Pentagon official and member of the defence Science Board, resigned from the advisory group on Tuesday over Esper’s handling of the incident at the church. 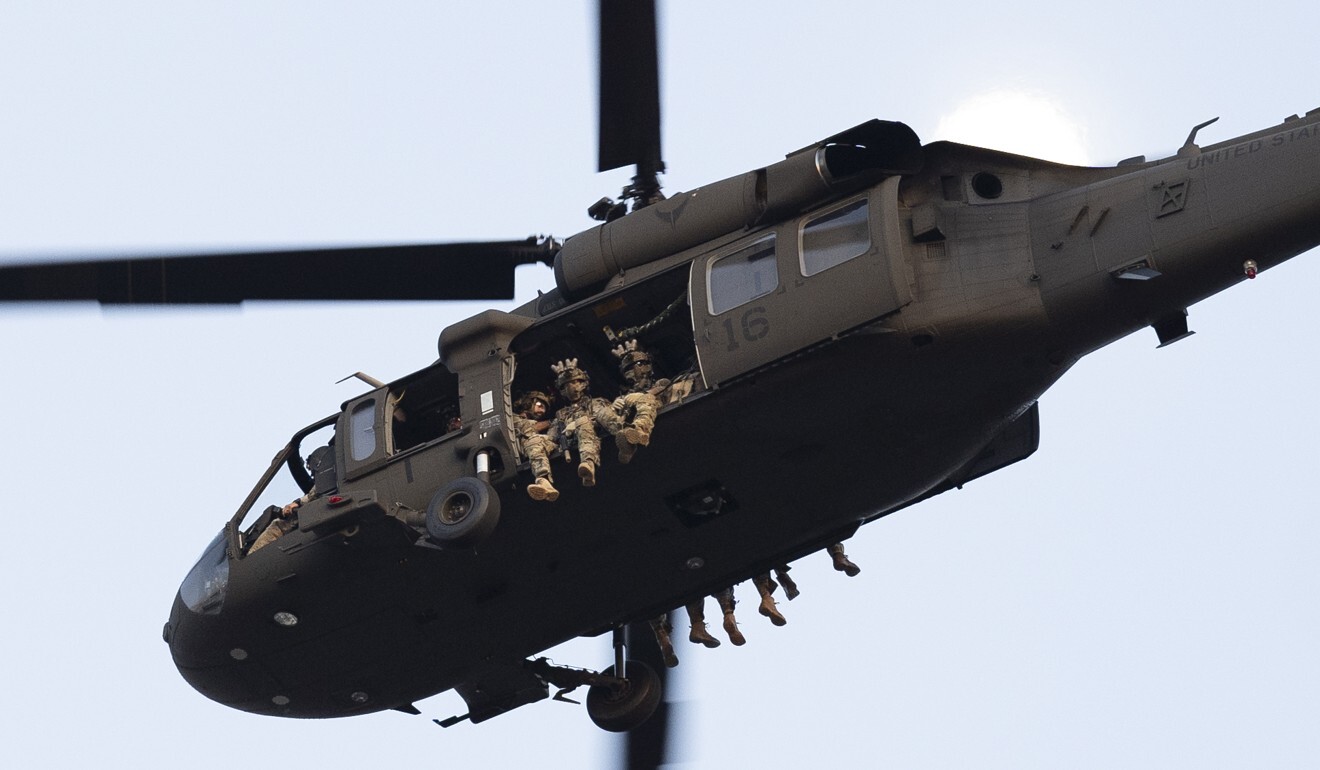 A military helicopter flies over the National Mall in Washington. Photo: DPA

“President Trump’s actions Monday night violated his oath to ‘take care that the laws be faithfully executed,’ as well as the First Amendment ‘right of the people peaceably to assemble,'” Miller wrote in a letter to Esper and then shared with The Washington Post. “You may not have been able to stop President Trump from directing this appalling use of force, but you could have chosen to oppose it. Instead, you visibly supported it.”

Congressman Adam Smith of Washington, the Democratic chair of the Armed Services Committee, came to Milley’s defence on Monday, saying that the general was trying to do the right thing and he “was out there to try to make sure that the Guard troops acted appropriately. … I think the message that he was trying to deliver … was appropriate.

Nevertheless, “I think he may have misread slightly the optics of the chairman of the Joint Chiefs of Staff in uniform walking around the nation’s capital. … I do not believe that it was his intent to send that message,” Smith told reporters.

“The optics of him being in uniform out there might not have been so bad if we didn’t have the president out there talking about going to war with the country and using the military and using overwhelming force and Secretary Esper talking about the need to occupy the battlespace,” Smith said. “If you take all of that rhetoric out of the equation, then … Chairman Milley walking around is perhaps a different message. But yes, in uniform out there, a little bit of a problem.” US President Donald Trump walks with US Attorney General William Barr, US Secretary of Defence Mark Esper, Chairman of the Joint Chiefs of Staff Mark Milley (right) and others from the White House to visit St. John’s Church. Photo: AFP

Smith on Tuesday called on Esper and Milley to testify before the House Armed Services Committee next week.

Officials and experts acknowledge that the president put Milley in a tough position with his remarks on Monday when he said the general was “in charge” of the protest response – despite the fact that the nation’s top military officer is not in the chain of command. But they criticised Milley for embracing his new role all too willingly.

Milley “ought to be a quiet advocate for Esper to be the public face of things, if the president insists on putting the DOD in charge,” Cohn said. “I acknowledge that Milley is in a difficult position because the president has put him there – I don’t advocate for Milley to make a big show out of anything.”

Retired Major General Charles Dunlap, the former deputy judge advocate general in the US Air Force, said Milley could lead the effort to manage the protests “in some administrative or managerial sense.” But “federal law nevertheless stipulates that the chairman ‘may not exercise military command over the Joint Chiefs of Staff or any of the armed forces’,” he said in an email.

Anything beyond that is “something that conceptually could undermine civilian control of the military that the Constitution centres on the president as commander-in-chief,” he said.

One former defence official said former colleagues were concerned that Milley was “a perpetual hype man”.

“Give him an idea and he will be the loudest, strongest, most extreme advocate of it with bells on,” the former official said. “This has advantages and disadvantages. You’re seeing the disadvantages today.”

The first senior defence official noted that Milley is now in a tricky spot: if officials succeed in tamping down the unrest, the chairman will get the credit. But if the protests continue unabated, the president could sour on him.

But a Republican congressional staffer and combat veteran, who asked for anonymity to speak freely, said the damage may already be done.

Esper and Milley “have squandered the moral legitimacy of a nearly 245-year-old institution in a single farcical late spring promenade,” the staffer said. “They have no honour and to hell with them both.”

TOP platform is the best digital marketing agency that provides it all. Here is where you can find the best influencers and get started with getting connected with people that can help to improve your online lobbying efforts.