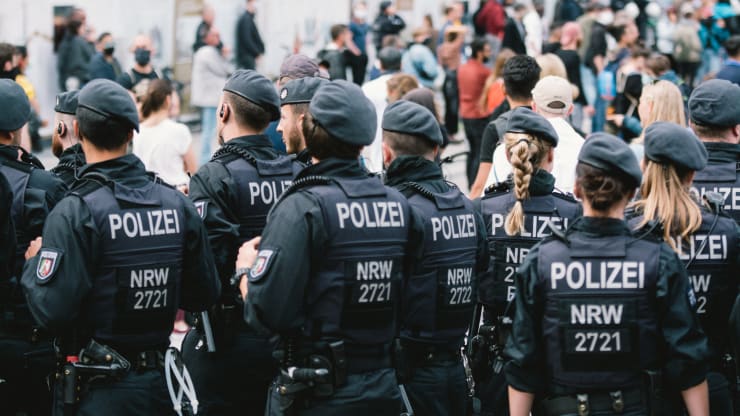 Posted By: Editorial Teamon: May 18, 2020In: NewsNo Comments
Print Email

Anti-lockdown protests were seen across Germany at the weekend as fatigue over restrictions grows in the region’s largest economy, and beyond.

A number of protests against the government’s coronavirus policy and restrictive measures took place in various Germany cities, including Berlin, Munich and Stuttgart, on Saturday.

More than 5,000 people gathered in Stuttgart, with police having to direct protesters to different locations in order to maintain social distancing measures, public broadcaster Deutsche Welle reported. Another 1,000 people demonstrated at the site of the now-canceled Oktoberfest beer festival. In Berlin, more than 1,000 police were deployed to demonstrations at several sites, Reuters reported.

While most protests were peaceful, some featured right-wing slogans and anti-Semitic conspiracy theories; there were some clashes between these protesters and counter-protesters. German newspaper Bild reported that the protests had attracted “a mix of right and left extremes, conspiracy theorists, anti-vaccine and corona-weary people.”

The anti-lockdown protests, which follow similar demonstrations the weekend before, come despite Germany gradually easing restrictions on public life. Shops and schools have re-opened in Germany, as well as playgrounds, churches and museums. Meanwhile, in a boost to sports fans, the country’s Bundesliga soccer league restarted at the weekend. Members of the public are required to wear masks while on public transport or shopping, however — a point of contention for anti-lockdown protesters.

Other issues raised by the demonstrators include anger at what they see as un-democratic government policies, restrictions on civil liberties and the belief that some measures, such as the wearing of face masks, are not rooted in scientific evidence.

Germany has over 176,000 confirmed cases of the coronavirus but has reported far fewer deaths than its European peers. Its death toll is currently under 8,000, according to data from Johns Hopkins University. By comparison, the U.K. and Italy have both reported over 30,000 deaths from the virus.

Nonetheless, German Chancellor Angela Merkel and the government remain cautious, lifting measures slowly and saying they will re-impose restrictions if the infection rate rises. In the meantime, there are growing concerns that right-wing extremists are exploiting anti-lockdown sentiment.

“We see a trend that extremists, especially right-wing extremists, are exploiting the demonstration,” Thomas Haldenwang, the president of Germany’s domestic intelligence agency, the Bundesamt für Verfassungsschutz (BfV), told the Welt am Sonntag newspaper on Sunday.

He also warned that internet coronavirus conspiracy theories were now being espoused in the real world. The paper quoted North Rhine-Westphalia’s Interior Minister Herbert Reul, who noted that “there are a lot of wolves in sheep’s clothing trying to sneak into the middle of society with their anti-democratic slogans.”

Anti-lockdown protests have not been confined to Germany, with demonstrations against perceived anti-democratic measures taking place elsewhere this weekend.

Demonstrators cross the tramway rails during an anti-government protest on May 16, 2020 in Warsaw, Poland. Different social and economic groups took the street to show indignation towards the ruling party PiS (Law &amp; Justice) and to protest against its lawlessness, the restrictions of civil rights and the lack of economic support towards businesses, especially during the Covid-19 pandemic.

In London, 19 people were arrested for breaking social distancing rules at an anti-lockdown rally attended by hundreds of people on Saturday.

Meanwhile in Warsaw, police used tear gas to disperse protesters who had gathered in the capital’s Old Town to demand that the government allow businesses to reopen following the coronavirus shutdown. Reportedly carrying slogans such as: “Work and bread,” and: “It will be normal again,” protesters have demanded that the government act faster to re-open the economy.

Still, Poland is ahead of the U.K. when it comes to easing restrictions; in Britain, which has recorded the highest number of death from the coronavirus in Europe, only a few lockdown measures have been lifted.

Now, citizens are allowed unlimited exercise outside and two individuals from different households can meet (as long as it’s outside and if social distancing measures are observed), however most businesses remain closed.

TOP has the best connections that you can also access once you become a member with this space. No other platform out there is going to offer you as much as TOP can, to give you the best in online services and digital marketing solutions today.