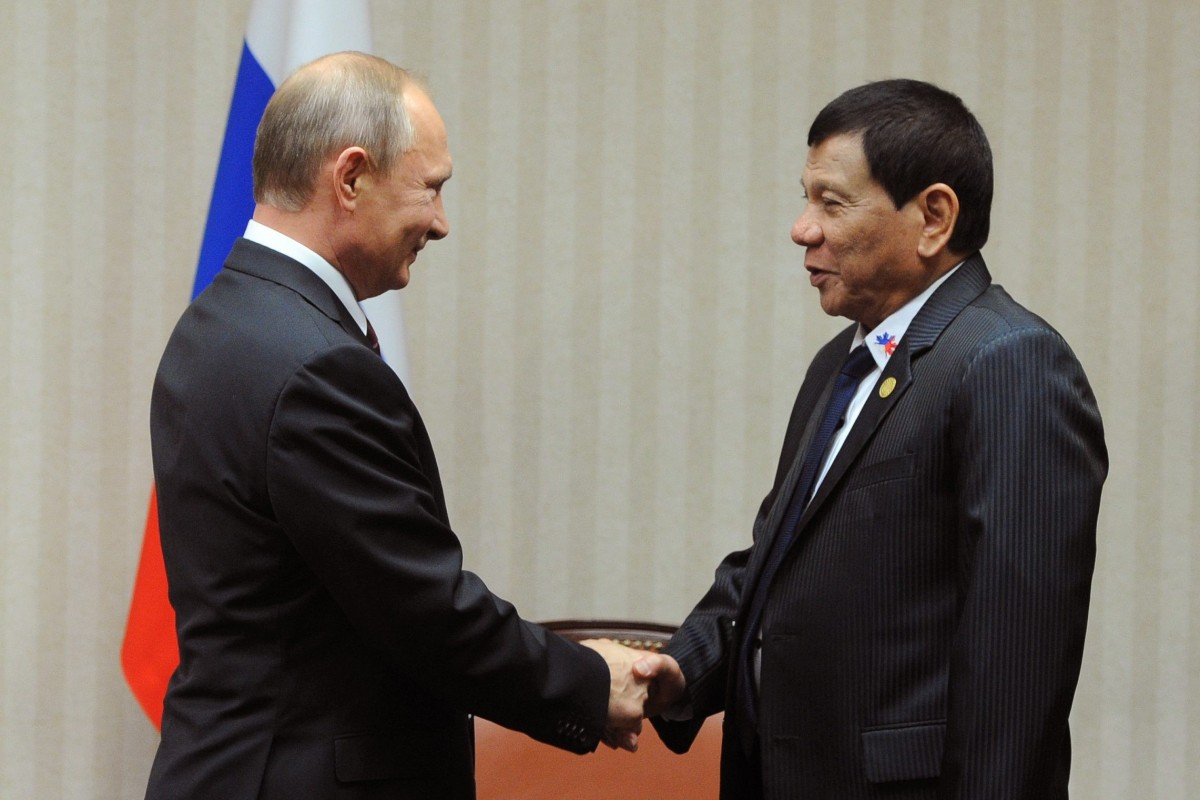 The timing of Moscow’s announcement over the weekend that President Vladimir Putin has accepted an invitation to visit Manila has raised eyebrows, as it comes on the eve of crucial bilateral talks between the Philippines and China on joint oil exploration in the South China Sea.

In a statement immediately welcomed by the Philippine presidential palace, Igor Khovaev, Russia’s ambassador to the Philippines, on Saturday told reporters Putin had accepted Duterte’s invitation “with gratitude”.

No date has been set for the visit, with Khovaev only saying Moscow would “do our best to arrange this meeting as soon as possible”.

A steering committee with representatives from both Manila and Beijing is set to meet this week to discuss the joint oil exploration deal. China has proposed a 60 per cent-40 per cent split in favour of the Philippines, according to Hermogenes Esperon, President Rodrigo Duterte’s national security adviser.
Courting Russia with South China Sea oil is a ‘dangerous gamble’ for Duterte.
Neither side has clarified if the split refers to ownership or revenue, and no other details were disclosed.

After an August meeting with Duterte, Chinese President Xi Jinping said the countries could take a “bigger step” in jointly developing oil and gas resources if they could properly handle their sovereignty dispute in the South China Sea.

But defence and security analysts say the Philippine president took a “dangerous gamble” on a visit to Russia last month, when he invited the Russian state oil company Rosneft to explore for oil in Philippine waters – which include parts of the South China Sea claimed by China.

The timing of Moscow’s announcement has not gone unnoticed. “It’s a welcome and historic development. Some wise guy in the Duterte government thought about timing [the invitation to Putin around the oil talks with Beijing],” said retired Philippine ambassador Lauro Baja, who once served as president of the United Nations Security Council.

Baja told the Post that no Russian president had visited the Philippines during his more than 40 years with the Department of Foreign Affairs.

“The Philippines then was almost a nonentity as far as Russia was concerned, [but] maybe now Russia recognises the strategic importance of the Philippines [in terms of] regional politics,” he said.

Baja said Moscow was aware of China’s entry into the Philippines, and could have its eye on some projects there.

“For all their so-called alliance, China and Russia are fierce competitors for influence and other benefits. And I think Russia has some objectives in mind like selling armaments and [forging] technological agreements,” he said, while cautioning that the situation remained “nebulous”.

“It’s a fascinating development but things are still early … For now, this is [just] an invitation extended by Duterte and accepted in principle by Putin.”

The United States will also be monitoring developments in the Philippines, according to Greg Poling, director of the Washington-based Centre for Strategic and International Studies’ Asia Maritime Transparency Initiative.

“Russia is eager to boost its influence in the region, and doubtless doing so with a long-standing US ally is seen as a bonus by Moscow,” he said. “There is nothing that prevents the Philippines from engaging in security cooperation with Russia, but the devil will be in the details.”

Poling added that the US would be concerned if Russia-Philippine cooperation involved acquiring military platforms that were incompatible with the shared platforms and doctrines used by Washington and Manila, as well as the latter’s other major security partners, namely Australia, Japan and South Korea. “The US will also be concerned if any acquisitions or cooperation with Russia might threaten information security or intelligence cooperation between the US and the Philippines,” he said.

“And finally, any major platforms acquired from Russia would likely require the US to impose sanctions on the Philippines unless a waiver is granted, and the US government has been very stingy about awarding those waivers because they undermine the effectiveness of the sanctions regime.”

Moscow last week offered to help the Philippines produce its own armsfor both domestic use and export with the help of Russian technology. Max Montero, an Australia-based Filipino security consultant, viewed that offer as “a swipe at the US”.

“Imagine a US stronghold and long-time ally and former colony becoming a manufacturing hub for Russian arms. And it makes it worse if [the Philippine armed forces] buys them too,” he said.

“Weakening the US alliances in Asia will benefit Russia [as it is] one of the US’ competitors in arms sales and geopolitics.”

The Philippines, Montero said, would benefit from such an arrangement since it is “a laggard in defence technology”. However, he pointed out that the country’s armed forces continue to buy weapons from the US and receive American arms as grants, potentially limiting the domestic market for Russian arms.

Navy cooperation has also been on the agenda, as Moscow and Manila discussed signing a new naval pact in March, while warships from each country have visited the other this year. Philippine naval vessels made their first-ever visit to Russia in October, while three Russian ships docked in the Philippines for a goodwill visit in January.

Russia is the top supplier of arms to Southeast Asia, and the No 2 global arms supplier, behind the US. Southeast Asia bought US$6.6 billion of Russian arms between 2010 and 2017, or more than 12 per cent of Russia’s sales, according to the Stockholm International Peace Research Institute, a Swedish think tank that publishes global arms tracking data.

How Social Media Stars Can Get to the TOP. To know more >> Theinternationalcampaigner.com

Things to remember when creating content for online lobbying.

2 Reasons that TOP is Supreme for Content Creation Services.

3 Ways to Get Great Online Reviews.

3 Simple Benefits for Advertisers to Registering with TOP.