If you’re tuning in to the next Democratic primary debate on Thursday, consider keeping your political views out of the office.

Close to 40% of workers say they engage in political discussions at work, according to data from Monster.com.

While it’s good to stay informed about the 2020 elections, it’s also important to be mindful of where and when you have politically charged conversations. 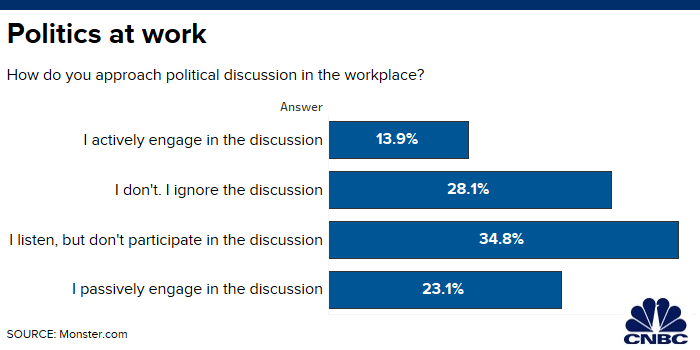 Your workplace should be the last place for a heated political debate with your coworkers.

“You’re going to alienate people that you have to work with,” said Jeff Zinser, owner of employment agency Right Recruiting in Blue Bell, Pennsylvania. “That’s a serious danger.”

Here’s how to navigate politics at the office.

Many companies strive to create cultures that revolve around team-building, which can be difficult to cultivate at times, Zinser said. Talking about the upcoming election only makes things even more difficult.

“You’re magnifying that challenge by also including politics into the day-to-day conversation,” he said.

Not only can discussing politics drive a wedge between you and your coworkers, it could also violate your company’s policies on political discourse.

“You might lose your job, and it’s not worth it,” said Vicki Salemi, career expert for Monster.com

Some companies have specific policies about what you can and cannot say in the workplace or on your social media accounts regarding politics.

Get familiar with your employer’s rules, said Salemi. “They may ask employees to refrain from posting politically related messages,” she said.

Some companies will list topics that can be posted on social media platforms and which issues must be avoided, Salemi said.

Many people don’t want to discuss politics at work.

Nearly 63% of workers say they either ignore political discussions or listen but don’t engage in any way, according to Monster.com.

While you might be eager to chat about the upcoming elections, your coworkers might not feel the same way.

People who exhibit restraint and display these characteristics have an advantage in the workplace over their peers who don’t, according to Zinser.

“Mindful, courteous and self-aware people tend to be the people that get promoted,” he said.

Here’s another reason to be mindful of sharing your opinions on social media: Employers worry about the tone of your tweets.

What’s important for many employers, “is not what the post is about, it’s the delivery of the post,” said Zinser.

Strident, discourteous, erratic or angry posts can be a red flag for employers even if they don’t have a specific policy in place, he said.

It might also be easier to take the discussion offline altogether and move your conversation to a more appropriate place, like a watch party.

“Discuss the debates when the time and place is right,” said Salemi.

Hoping to dodge the issue at work? Try shifting the conversation to a less emotionally charged topic, such as sports, she said.

“Start pivoting into other topics that are less opinionated and less divisive,” said Salemi.