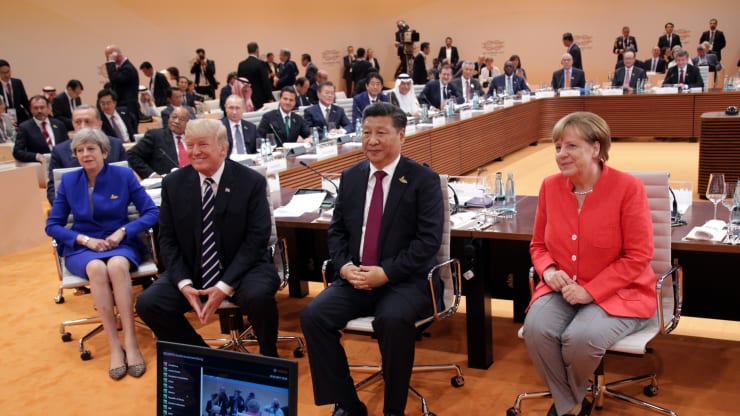 The United States has more to lose from a full-blown trade war with the EU than it does with its current conflict with China, experts have told CNBC.

President Donald Trump has kept up his tough rhetoric against the European Union despite focusing on Chinese tariffs in recent months. But his administration is due to decide in November whether to impose duties on one of most important industries in Europe: autos.

There have already been tariffs on European steel and aluminum — which led the bloc to impose duties of 25% on $2.8 billion of U.S. products in June 2018, and, there’s an ongoing dispute regarding Airbus and Boeing — but experts believe a wider spat with Europe would be much more damaging than the current tit-for-tat with China. Leaders of the G-7, the world’s seven largest economies, are due to talk global trade at a meeting in France later this week.

“EU-U.S. trade matters most. It is by far the biggest single bilateral trade flow in the world,” Florian Hense, an economist at Berenberg, told CNBC via email.

“Counting exports and imports of goods and services, U.S.-EU bilateral trade exceeded that between the U.S. and China in 2018 by more than 70%,” he added.

Data from the Office of the U.S. Trade Representative shows that in 2018, the U.S. imported $683.9 billion of EU goods and $557.9 billion from China. However, looking at U.S. exports, these reached $574.5 billion to Europe and only $179.2 billion to China. These figures included both goods and services.

“In 2018, the U.S. exported more than three times more to the EU than to China,” Hense said, adding that the region could therefore hit back hard against Washington.

For its part, the EU’s trade chief Cecilia Malmstrom has said they would rather not be in this position of introducing levies, but would do so if the U.S. struck first.

“The rules of international trade, which we have developed over the years hand-in-hand with our American partners, cannot be violated without a reaction from our side,” she said in June 2018. Since then, every time the U.S. has threatened to impose further levies, Brussels has worked up different lists of goods to show how it could hit back at the White House.

Furthermore, both the U.S. and Europe cannot afford a trade war at this stage. “While the U.S.-China trade war is now starting to have effects on the broader health of the economy, it has taken a while and some of the effects were balanced by a benign economic climate,” Fredrik Erixon, director of the think tank ECIPE, told CNBC.

“That is not the case if there is a serious increase in tariffs between the U.S. and the EU in the autumn. Both economies are slowing down, and the cyclical effect of the tariffs is likely to be pretty strong,” he added.

Data out at the end of July showed the euro zone — the 19-member region that shares the euro — growing at a rate of just 0.2% in the second quarter. This was down from a rate of 0.4% in the first quarter of the year. As a result, the European Central Bank (ECB), which oversees monetary policy in the region, is set to announce further stimulus after the summer.

In the U.S., the economy grew at an annualized rate of 2.1% in the second quarter of the year — 1 percentage point lower than in the previous quarter — and the U.S. Federal Reserve announced in July its first rate cut in more than a decade. Speaking at the U.S. Senate in mid-July, Fed Chairman Jerome Powell said that “crosscurrents, such as trade tensions and concerns about global growth, have been weighing on economic activity and the outlook. ”

US multinationals at risk

Erik Jones, professor of international political economy at Johns Hopkins University, explained that the business models of multinational firms is in danger as a result of a potential U.S.- EU trade war.

“Much of the (EU-U.S.) trade takes place within firms rather than between them … (as a result) when you impose tariffs between the U.S. and Europe, you end up raising the prices for consumers and complicating the way goods are assembled in both places, as in the U.S.-China case, but you also end up disrupting the profitability of the business models for large multinationals,” he said.

“Since many, if not most of those large multinationals are American, this is going to put a further drag on the U.S. economy,” he added.

According to the European statistics office, the top U.S. goods exported to Europe in 2018 were engines and motors, aircraft and associated equipment, and medicinal and pharmaceutical products. In terms of imported goods, the U.S. bought mostly autos from the EU as well as pharmaceutical and medical goods.

“In other words, it would undo all the structural advantages that successive U.S. administrations created since the end of the Second World War,” he added.

“The first thing you need to decide when you build your blog is what you want to accomplish with it, and what it can do if successful.” – Ron Dawson – Subscribe with THE ONLINE PUBLISHERS TOP online bloggers to offer your services as a blogger.

Earning From Your Social Media By Becoming A TOP Trender.