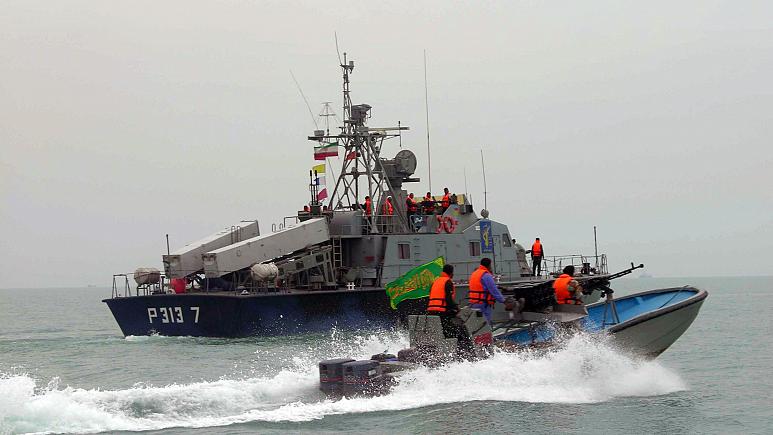 “A foreign vessel smuggling one million litres of fuel south of Larak Island in the Persian Gulf has been seized,” the station said.

The vessel was first towed on Sunday after a distress call and it was later seized for fuel smuggling, it added.

Iran’s state television station did not identify the vessel.

An oil tanker based in the United Arab Emirates was also reported to have disappeared off trackers as it sailed in the Gulf on Sunday.

A Panamanian-flagged oil tanker, the 58-metre MT Riah stopped transmitting its location overnight on Sunday near Qeshm Island, which has a Revolutionary Guard base stationed on it.

The UK foreign office said it was seeking further information following reports of the seized tanker, adding it continued to urge the Iranian authorities to de-escalate the situation in the region.

Earlier this month, Britain raised the threat to its shipping in Iranian waters to “critical”. A day later, Iranian boats attempted to stop a British oil tanker in the Gulf of Oman before being warned off by a Royal Navy ship, according to the UK Ministry of Defence.

Tensions have been high since June 13 when two tankers were damaged by explosions in the Gulf of Oman, a strategic waterway crucial to global energy supplies.

The US accused Iran of being behind the attacks, but Iran insisted that it had “no connection with the incident.”

British Royal Marines detained Iranian oil tanker Grace 1 off the coast of the British Mediterranean territory of Gibraltar at the beginning of July on suspicion of violating sanctions against Syria.

British Foreign Secretary Jeremy Hunt said the tanker could be released if the UK receives a guarantee that the oil is not bound for Syria.

Iran’s seizure of the foreign tanker came at a time of mounting tensions with the US over the unravelling nuclear deal between Tehran and other world powers.

US President Donald Trump pulled out of the deal last year and imposed sanctions on the country, including on Iranian oil exports.

Fears of open military conflict in the Middle East rose in June after the US prepared limited strikes on Iran, which it later called off, following the downing of a US surveillance drone.

Tehran said the drone was flying over Iranian airspace, which Washington denied.

“As a freelancer your biggest advantage is that you only need a handful of clients to succeed. Most companies need to find thousands of customers. You only need to find one at a time.” – Robert Williams – Start freelancing by subscribing to THE ONLINE PUBLISHERS to get worldwide exposure in the digital marketing and publishing industry

4 Ways TOP Platform Can Help You Grow Your Business.

Ex-Cisco CEO says Facebook needs to ‘get ahead of regulators,’ faces a multiyear challenge.