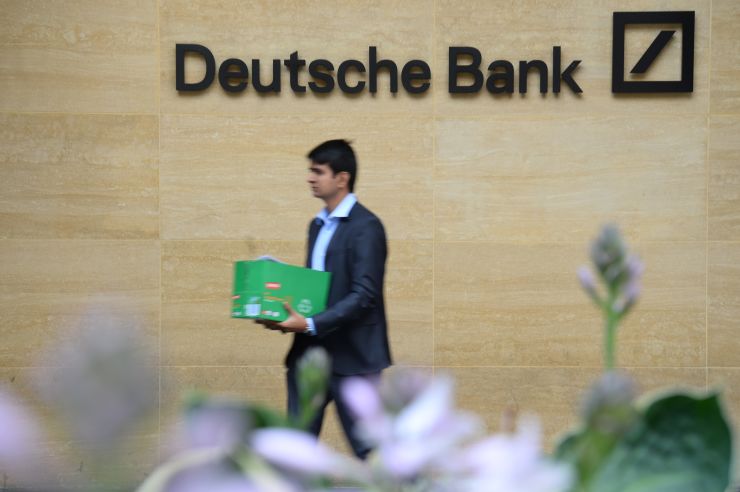 Deutsche Bank employees were seen leaving its London offices on Monday after the German lender announced its intent to cut 18,000 jobs by 2022 in a sweeping overhaul of its global business.

A number of visibly disgruntled employees were seen leaving, some with A4 envelopes, while a source with knowledge of the matter confirmed to CNBC that people were being asked on Monday morning to gather their belongings and leave the premises.

The cuts are focused in the closure of the bank’s global equities sales and trading business in a bid to improve profitability, and are part of an effort to reduce global headcount to around 74,000 and cut adjusted costs by a quarter to 17 billion euros ($19.08 billion). Deutsche Bank employs around 7,000 people in London out of the 7,990 across the U.K., having first opened in the capital in 1873.

The bank has not disclosed a regional breakdown of the job cuts, but both London and New York are hubs for its investment bank’s trading operations and may therefore bear the brunt.

One employee outside the building on Monday morning described happenings inside as “elaborate and complicated.”

Meanwhile, several sources told CNBC that some employees, across London and New York offices, received an email at midnight for an 8AM “meeting invite” that was to take place on Monday morning. Many employees had also cleared out their desks last week in anticipation of their roles being made redundant, a source told CNBC.

Along with the job cuts, the bank also plans to create a 74 billion euro “bad bank”. Along with investment banking chief Garth Ritchie, whose departure was announced Friday but who will advise the board until November, fellow board members Sylvie Matherat and Frank Strauss will leave the bank as of July 31.

A Deutsche Bank spokesperson said the overhaul was a bid to “focus our resources on businesses where clients need us most.”

“We are setting up a dedicated corporate bank specializing in the financing and treasury products the world’s companies need to support trade and investment around the globe. Deutsche Bank will remain an international bank,” the spokesperson said on Monday.

“We will retain a significant presence here and remain a close partner to our UK clients and to international institutions that want to access the London market. We regret that the changes we are making will affect some of our colleagues and we will do everything we can to support them.”

Deutsche’s share price was down 6.3% in afternoon trade following an early rally, as analysts met the bank’s grand restructuring plan with a degree of skepticism.

“Don’t focus on having a great blog. Focus on producing a blog that’s great for your readers.” – Brian Clark – Subscribe with THE ONLINE PUBLISHERS to offer your services as a blogger.

Getting Paid For Starting As An Online Reviewer.

3 Reasons to Opt with TOP for Online Reputation Management Solutions.

4 Reasons TOP is The Best Option For Online Reputation Repair.

Any amount of running linked to significantly lower risk of early death.

Shares of Nintendo tumble after it announces a delay in a closely watched video game.

The French patients ‘cured’ with wine.