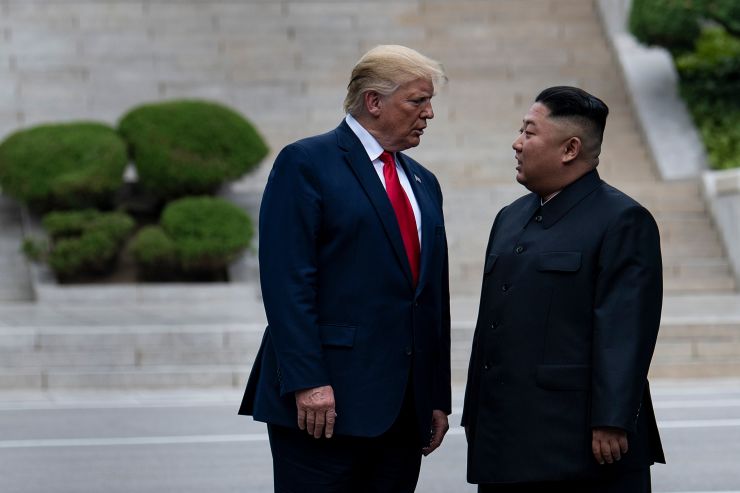 North Korea’s mission to the United Nations has accused the U.S. of being “obsessed with sanctions” and “more and more hell-bent on hostile acts” against Pyongyang.

North Korea’s delegation to the UN said Wednesday that the country was responding to a letter sent to all UN member states late last month. In it, the U.S. — alongside the U.K., Germany and France — called on countries around the world to implement tougher sanctions on Pyongyang.

The mission said the letter was sent by the U.S. on June 29, the same day President Donald Trump tweeted he would like to shake hands with leader Kim Jong Un during his visit to the demilitarized zone on the Korean Peninsula.

“What can’t be overlooked is the fact that this joint letter game was carried out by the Permanent Mission of the United States to the UN under the instruction of the State Department, on the very same day when President Trump proposed for the summit meeting,” a press statement from the North Korea mission said.

The meeting on Sunday, which saw Trump become the first sitting U.S. president to set foot in the isolated regime, culminated in the pair agreeing to resume talks aimed at getting Pyongyang to give up its nuclear weapons program.

The U.S. letter to UN member states, which was reportedly sent on June 27, urged countries to call for the return of all North Korean workers by the end of 2019.

Last month, the U.S. told a council sanction committee that North Korea had breached a cap on refined petroleum imports, mainly through transfers between ships at sea.

The U.S. pushed for the committee to put an immediate stop to deliveries of refined petroleum to North Korea but Russia and China, both allies to Pyongyang, delayed the move.

“It is quite ridiculous for the United States to continue to behave obsessed with sanctions and pressure campaign against the DPRK, considering sanctions as a panacea for all problems,” North Korea’s mission said in a statement.

“It speaks to the reality that the United States is practically more and more hell-bent on the hostile acts against the DPRK,” it added. North Korea is formally known as the Democratic People’s Republic of Korea (DPRK)

“Fake news is cheap to produce. Genuine journalism is expensive.” – Toomas Hendrik Ilves –  Subscribe with THE ONLINE PUBLISHERS to offer your services as a journalist.

The rise of superbugs: Facing the antibiotic resistance crisis.

5 Tips to Keep Your Nails Strong.