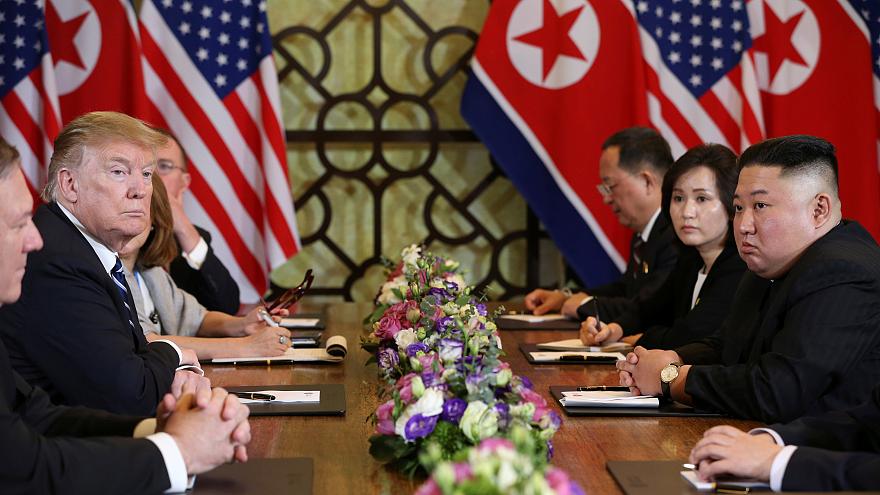 The Vietnam summit failed because North Korea wanted all sanctions lifted, said US President Donald Trump during a press conference after a summit with North Korean leader Kim Jong Un in Vietnam.

Trump said that the agreement papers were ready to be signed on Wednesday but that the deal on the table just wasn’t “appropriate”.

“I could’ve signed today but I want to do it right than do it fast,” said Trump.

In an earlier statement, the White House said that Trump and Kim failed to reach an agreement during their two-day summit in Vietnam but that they still had constructive discussions on denuclearisation.

“President Donald J. Trump of the United States and Chairman Kim Jong Un of the State Affairs Commission of the Democratic People’s Republic of Korea had very good and constructive meetings in Hanoi, Vietnam, on February 27-28, 2019. The two leaders discussed various ways to advance denuclearisation and economic driven concepts. No agreement was reached at this time, but their respective teams look forward to meeting in the future.”

At the press conference, Trump said that Kim was prepared to denuclearise a “large portion” if the US lifted all sanctions. But in the end, it wasn’t the area that the US wanted denuclearised so the deal could not work.

Secretary of State Mike Pompeo said that even if the two sides made “real progress” during the summit, they didn’t get “all the way”.

“Unfortunately, we didn’t get all the way that ultimately made sense for the United States of America. I think chairman Kim was hopeful that we would. We asked him to do more. He was unprepared to do that, but I’m optimistic,” said Pompeo, adding that US and North Korean teams will be getting together in the weeks ahead to keep working on a deal.

Trump said that he wanted to take off sanctions but that North Korea had to “give up more”.

However, the US leader did not note that he was promised by Kim that they would cease all testing of rockets and nuclear.

The US president remained vague on whether he would be having another summit with the North Korean leader.

On military exercises with South Korea?

Trump said that he gave those up because of their cost.

“We spend hundreds of millions of dollars on those exercises, and I hated to see it. I thought it was unfair. And frankly, I was sort of the opinion that South Korea should help us with that.”

Trump said that his former lawyer’s testimony was “incorrect” and that it’s timing, in the middle of the summit with Kim, was a “terrible thing”.

The US president said Cohen lied about everything except the collusion with the Russian hoax.

What was said during the summit?

Earlier Kim and Trump seemed more confident at making progress in their talks. Kim said he would be willing to denuclearise, speaking on the second day of his summit with US President Donald Trump in Hanoi, Vietnam.

The two leaders held more one-on-one talks and roundtable discussions hoping to improve relations and reach a deal on denuclearisation.

“If I’m not willing to do that, I won’t be here right now,” Kim told reporters through an interpreter when asked if he was ready to give up his nuclear weapons.

However, the North Korean leader did not elaborate on what denuclearisation meant or the concrete steps he would be taking.

While the US would like North Korea to give up all its nuclear weapons, North Korea wants the removal of a US nuclear umbrella for its Asian allies such as South Korea and Japan.

Trump said he was in no rush to see North Korea denuclearise.

“Chairman Kim and myself, we want to do the right deal.”

Kim, for his part, remained more vague on whether he would be able to strike a deal with Trump.

“It’s too early to tell, but I wouldn’t say I’m pessimistic. For what I feel right now, I do have a feeling that good results will come out,” he said, in what was believed to be his first ever response to a foreign journalist.

When asked about the responsibility for the death of American Otto Warmbier after he was detained in North Korea, Trump said that Kim told him that he didn’t know about it and that he would take the chairman’s word.

“I really believe something horrible happened to him, and I really don’t think the top leadership knew about it. […] And I did speak about it, but I don’t believe he would have allowed that to happen. It just wasn’t to his advantage to allow that to happen.”

A US office in Pyongyang?

Kim also said he was ready to “welcome” a US office in Pyongyang, signalling the start of new US-North Korean relations.

“We do regret that President Trump and Chairman Kim Jong Un did not reach a complete agreement at today’s summit. But, it is clear that (the summit) made meaningful progress than any other time in the past,” said Kim Eui Keum, SK’s presidential spokesperson in a briefing following the breakdown of the Hanoi summit.

“We understand that the two leaders expanded the scope and the depth of understanding for where each other stood by carrying out in-depth discussion. In particular, President Trump’s expressed continued determination to engage in talks and his optimistic views allow for the bright prospect for the next summit.

“The fact that, President Trump openly expressed his desire to lift sanctions in relation to North Korea’s denuclearisation proves that the level of discussion between the US and NK has been elevated further up,” Kim said.