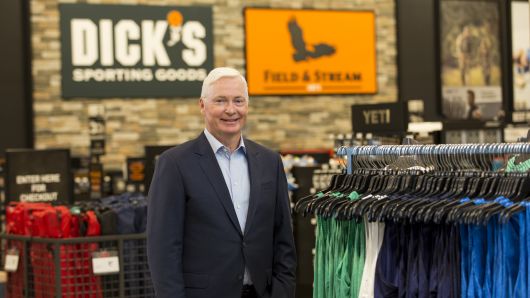 It’s been roughly one year since Dick’s Sporting Goods CEO Ed Stack took a controversial stance on guns, pulling high-capacity magazines from stores and halting the sale of firearms to anyone under 21 years old. Dick’s Sporting Goods’ decision marked one of the strongest stances taken by corporate America in the national gun debate. Retailers like Walmart and Kroger later followed.

On Monday, traveling to New York to accept the Committee Encouraging Corporate Philanthropy’s “Force for Good Award,” Stack says he doesn’t think twice about the move. “We talk about it internally and I often say: If we had a mulligan, we’d do it all over again,” he said.

In fact, Stack is doing even more to get behind his company’s efforts last year. He, along with a handful of other CEOs, on Monday signed onto a letter sent to Congress in support of the HR8 background check bill. Background checks are something “both sides of the aisle can get behind it,” Stack said.

Still, Dick’s Sporting Goods’ sales took a hit because of the controversial decision to pull guns from stores. The retailer is now calling for sales at stores open for at least 12 months to be down between 3 percent and 4 percent in 2018, largely because of weakness in the hunting category. That’s compared with a drop of 0.3 percent in 2017. The company has said that negative impact is expected to lessen as time passes.

Since its decision last February, which came after a 19-year-old shooter killed 17 students at Stoneman Douglas High School in Parkland, Florida, Dick’s Sporting Goods has begun testing the removal of all hunting products from 10 stores. It has replaced those items with higher-margin merchandise, like baseball gear and kayaks. It brought in a simulator for kids to try out baseball bats, for example.

And though Stack wouldn’t comment Monday on how that trial was going — he said the company plans to share more details when fourth-quarter earnings are released on March 12 — it’s possible Dick’s Sporting Goods takes this approach at more locations.

In many ways, Stack said he’s putting all the noise of 2018 — and the backlash from angry consumers — “in the rear-view mirror” and is focusing in on some of Dick’s Sporting Goods’ other initiatives. The retailer is trying to boost its e-commerce sales, open two new fulfillment centers and grow its footwear sales — a category he said has been improving thanks to product innovation from Nike and Adidas.

Despite others’ concerns, Stack also said he hasn’t noticed signs of consumers pulling back on spending due to a fear of a recession looming.

“We’re not really worried about that right now,” he said.

Dick’s Sporting Goods shares are up more than 20 percent so far this year.