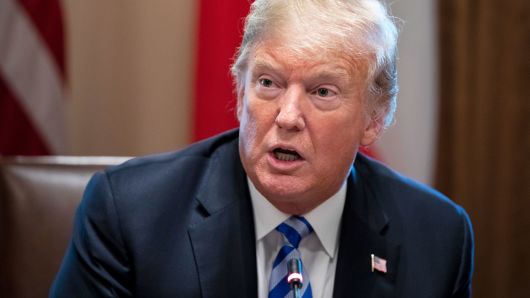 Trump: ‘I’m not happy’ with border security deal, but another shutdown looks unlikely

President Donald Trump said Tuesday he has reservations about a tentative federal spending deal, but he does not think parts of the government will shut down for the second time since December.

The president did not immediately commit to signing the agreement reached late Monday to prevent a partial government closure this weekend.

“The answer is no. … I’m not happy” about the agreement, Trump said during a Cabinet meeting. However, he added, “I don’t think you’re going to see a shutdown.”

Bipartisan appropriators emerged from a meeting Monday night saying they have a deal in principle to keep the government running past a midnight Friday deadline. The measure would put about $1.4 billion toward physical border barriers, but not a wall as the president has demanded. It includes money for 55 new miles of bollard fencing on the U.S.-Mexico border.

Despite the apparent breakthrough in Congress, Trump’s stance leaves the fate of government funding uncertain as another shutdown draws closer. While the president’s political motives for letting funding lapse have lessened since the last closure, it is not certain he will sign what lawmakers approve.

Senate Appropriations Committee Chairman Richard Shelby, R-Ala. briefed Trump on the agreement Tuesday afternoon. After talking to the senator, the president showed signs of warming to the deal.

In tweets, Trump said he is “looking over all aspects knowing that this will be hooked up with lots of money from other sources,” in an apparent reference to administration efforts to redirect money from other agencies to the wall project. He also tried to downplay the absence of $5.7 billion he demanded to build the border wall. The president claimed: “Regardless of Wall money, it is being built as we speak!”

Earlier, Trump said he would decide whether to sign the spending measure once he sees the final details. Legislation is expected by Wednesday.

Other top Republicans nudged Trump to keep the government open. On Tuesday, Senate Majority Leader Mitch McConnell, R-Ky., told reporters that the proposal is “not everything the president hoped to get, but I think it’s a good step in the right direction. I hope he’ll decide to sign it.”

Both Democrats and Republicans had some reservations about the plan. House Appropriations Committee Chairman Rep. Nita Lowey, D-N.Y., told MSNBC “it’s not perfect. It’s a bipartisan bill, and we have to govern.”

Here’s some of what the spending plan would include, according to a congressional aide:

In December, Trump demanded $5.7 billion to build his proposed wall and threatened to veto any measure that did not include funds for the barrier. Democrats refused to pass the funds, and Republicans wavered on a measure passed by the Democratic-held House to keep the government running. Funding for about a quarter of the government lapsed for 35 days in the longest ever U.S. shutdown.

About 800,000 federal employees were furloughed or worked without pay when about a quarter of the government closed during parts of December and January. They missed two paychecks, and still face the prospect of more financial hardship if lawmakers and Trump cannot agree on spending legislation.

The president said Tuesday he “accepted the first” shutdown and is “proud of what we accomplished” with it. Before funding lapsed in December, Trump said he would be “proud” to close the government over the issue of border security — then tried to pin the blame on Democrats. Various public opinion polls showed a majority of Americans put the onus for the shutdown on Trump.

Trump claimed on Tuesday that Democrats would own the closure if funding lapses again Saturday. However, House Speaker Nancy Pelosi, D-Calif., and Senate Minority Leader Chuck Schumer, D-N.Y., have backed the deal brokered by bipartisan appropriators.

Schumer called the agreement “a path forward for our country” away from “a dreaded government shutdown.”

Again denied funding for his proposed border wall by Congress, the president claimed he would build the structure anyway. He said he is “adding things” to the border security agreement — though it was unclear if he meant he wants to include more provisions in the congressional agreement or take more steps through executive action.

Trump again said he is considering declaring a national emergency to allocate money for the wall without congressional approval. Congressional Republicans are divided over an emergency declaration, which would swiftly spark lawsuits.

The Trump administration may take funds from “far less important areas” in order to construct the barrier, the president added.

Some of Trump’s allies in conservative media who have pushed for a border wall saw the deal as a poor one for the president. Fox News host and Trump confidant Sean Hannity called it a “garbage compromise.”

Comments from conservative Trump supporters in part led to the president’s veto threat in December.