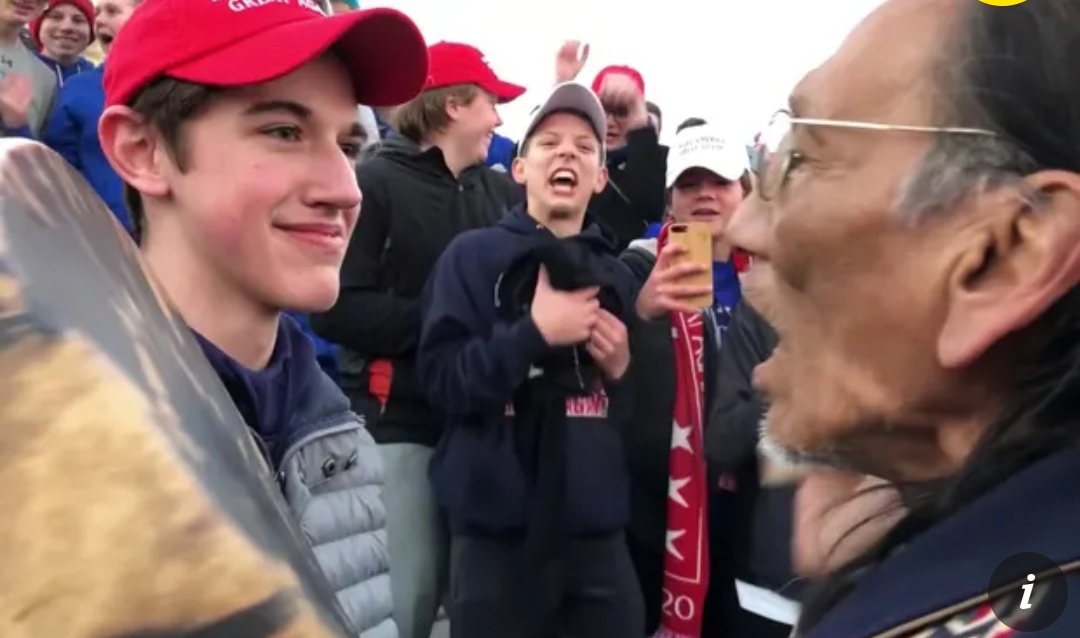 On Tuesday night, Fox News hosts continued to feast on the controversy, which was sparked by a standoff between Covington Catholic high school students and a Native American veteran called Nathan Phillips. Footage show students wearing pro-Trump Maga hats taunting the Omaha tribe elder. The relentlessly repeated talking point — that there was a collective “rush to judgement” on the boys because they were Trump supporters — was used by conservative anchors Tucker Carlson, Sean Hannity, and Laura Ingraham to attack mainstream media and left leaning social media users.

On Wednesday morning, Sandmann got almost nine minutes of airtime on a national breakfast program to make his case, after his family hired a Republican-linked PR firm.

In making this happen, conservative media have normalized the boys’ aggressive form of political expression, and tried to further discredit both fact-oriented media and high-profile liberals. Media outlets have been effectively gaslighted, and many climbed down from coverage which was based on the most clear and obvious interpretation of the boys chanting, making gestures and making tomahawk chops.

What it tells us is that in 2019, conservatives understand they can construct a parallel reality and have it accepted. They can act in bad faith and prevail, using tried and tested tactics that liberal media continue to fall for. Those are:

1. Reframe the debate as soon as possible

One thing that rightwing media understands much better than their liberal counterparts is that the ubiquity of recording devices at any current protest tends to shatter the public record into dozens of pieces.

A particular version of events based on early footage can always be called into question, and another version put forward as definitive, as more footage, and alternative edits of footage emerge. Partisans can pick and choose, knowing that a definitive version of what happened may not emerge before the news cycle has moved on.

Just as importantly, additional footage allows the discussion to be reframed. Instead of asking why a group of schoolboys were protesting wearing hats that many in the community view as a symbol of racism, conservatives quickly turned it into a game of who approached whom, and began discussing the teenagers as if they were literal martyrs.

The most influential revisionist account of the confrontation to emerge was written by Reason’s Robbie Soave. In a commentary on the two-hour version of the original video (which readers were unlikely to watch in full), where Soave reframed the discussion to include the actions of a group unrelated either to the students or to Native protesters, and claimed that there had been no wrongdoing on the part of the students. Conservatives picked this ball up and ran with it as far as they could.

So far, conservative media has been unified and resolute in hammering the narrative that Nathan Philips, a Native American veteran, somehow provoked the boys by coming between them and a small group of Black Hebrew Israelites, to whose insults they had responded to with chants.

No amount of additional footage showing their Maga-yelling rowdy behavior and sexist comments before the event – not even clear and concise edits showing how aggressive and provocative the teens were and how calm Phillips was – is capable of knocking them off this course.

If you want a lesson in how this kind of persistence works, look at the coverage from Gateway Pundit since Saturday. Very early on, Jim Hoft recognized the symbolic value of the confrontation, doggedly pushed his own, partial interpretation of events, smeared everyone on the other side, and then brought the entirety of conservative media with him. (Earlier, even some conservative outlets had been critical of the boys). His reward was seeing that version of events trumpeted by Tucker Carlson on Monday night, who also launched a broadside at any conservatives who had wavered from exonerating the teens.

That night, and Tuesday, Carlson’s fellow Fox News hosts were singing from the same songsheet. And if Fox News presents a unified message, the President frequently echoes it.

3. Focus on the extremes of the other side

Another tactic conservative media uses is to only consider the most appalling versions of opposing arguments, and to focus their audience’s anger on reliable scapegoats.

To avoid confronting reasonable arguments or new evidence, conservatives emphasize the worst of the other side – like tweets calling for violence or doxxing. Tweets calling for violence or doxxing against high school students are obviously and clearly unacceptable, but nor are they typical of the criticisms made of the boys, their school, and their conduct. They also focus the audience on liberal journalists and celebrities – mostly women – who their audience’s feel comfortable in deriding and dismissing.

As of Wednesday, as a result of these well-work tactics, liberal media has almost completely backed away from their initial, justified take on the story.

When will we ever learn?