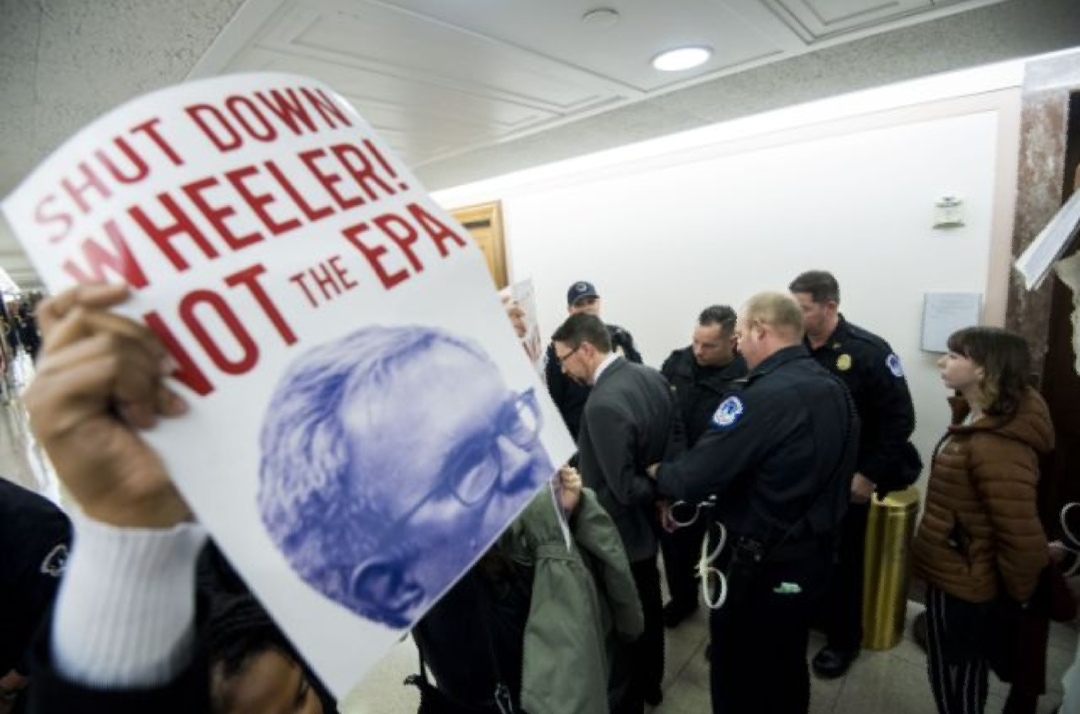 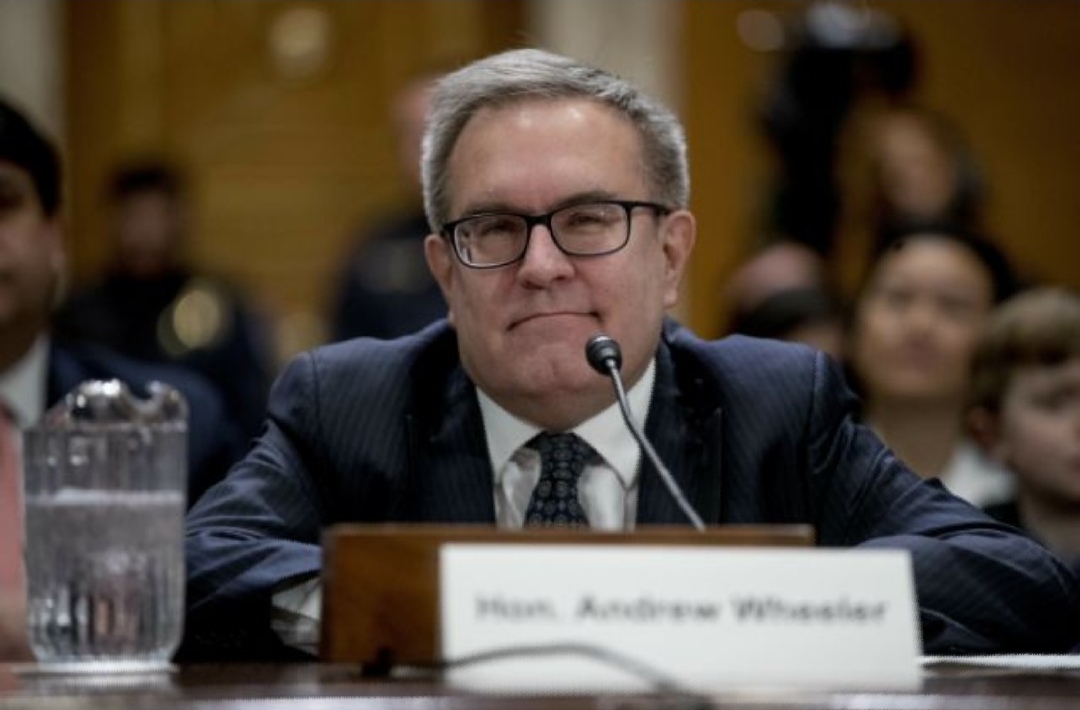 Andrew Wheeler arrives to testify at a Senate Environment and Public Works Committee hearing to be the administrator of the Environmental Protection Agency, on Capitol Hill in Washington

The Democrats on the Senate Environment and Public Works Committee hammered Andrew Wheeler on Wednesday for his role in systematically rolling back environmental protections at the Environmental Protection Agency (EPA).

Wheeler, a former coal lobbyist, has been the agency’s acting administrator since his predecessor, Scott Pruitt, resigned amid ethics scandals in July. Trump nominated Wheeler to become the permanent head of the agency last week.

Sen. Bernie Sanders, I-Vt., who caucuses with the Democratic Party, reproached Wheeler for not even mentioning the words “climate change” during his opening statement at a time when the scientific community is urgently calling for drastic cutbacks in fossil fuel use to avert irreparable environmental damage.

“I would not call [climate change] the greatest crisis. No sir. I consider it a huge issue that has to be addressed globally,” Wheeler said.

Sanders responded that the U.S. has the strongest economy in the world and leadership by the EPA could influence the entire international community. He noted that many Republican senators refuse to acknowledge the danger of global warming and that the EPA head should be pressing the matter with Congress.

“Will you provide the leadership in this country and the world to say that we are concerned about the future of this planet for our kids and our grandchildren?” Sanders demanded.

Wheeler said that rather than advocating for climate action, he would continue to implement the laws that Congress has already passed. “We are concerned about the future of the planet for our kids and our grandchildren and we are implementing the laws that have been passed by Congress,” he said. 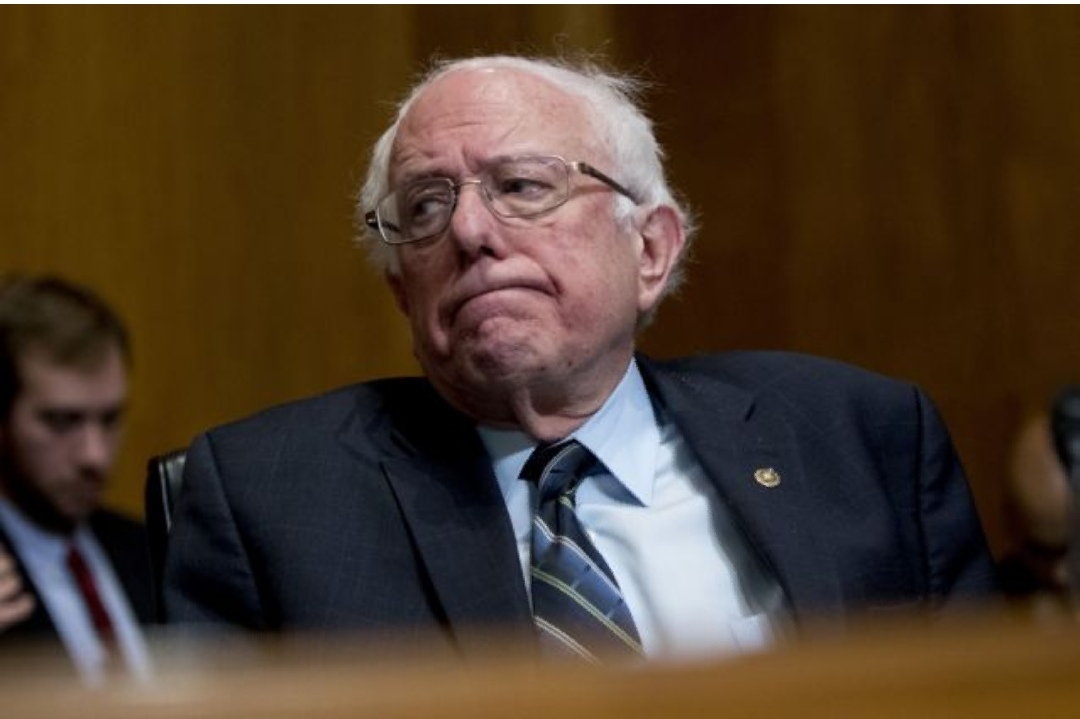 Sen. Bernie Sanders, I-Vt., reacts after questioning Andrew Wheeler as he testifies at a Senate Environment and Public Works Committee hearing to be the administrator of the Environmental Protection Agency, on Capitol Hill in Washington, Wednesday, Jan. 16, 2019.

Sanders asked Wheeler if he agrees with scientists that climate change is causing larger and more destructive wildfires in the West. Wheeler said that while climate change “probably [has] some relation” that “the biggest issue with the wildfires has been forest management” — echoing Trump’s views, which are disputed by forestry experts.

Sen. Cory Booker, D-N.J., said that Wheeler’s policies — such as repealing and replacing the Clean Power Plan — “fly in the face” of the recommendations from the Intergovernmental Panel on Climate Change and even by EPA’s own scientists.

He said that Wheeler when Wheeler took office as Pruitt’s deputy he swore to protect human health and the environment, but that he’s consistently taken actions that undermine that mission.

“It just seems the consistency of actions you are taking [from] weakening rules to undermining the sense of urgency that across agencies [scientists] are telling us that we face growing, growing challenges. Not just now but really over the next 25 years,” Booker said.

Wheeler responded that he believes the EPA is moving forward on reducing greenhouse gases through the Affordable Clean Energy (ACE) Rule.

Booker countered that data from Wheeler’s own scientists contradict those claims.

Republican Sens. John Barrasso of Wyoming (the committee’s chairman), James M. Inhofe of Oklahoma, and Shelley Moore Capito of West Virginia defended Wheeler. Inhofe submitted to the record articles that challenge the methods and findings of the NCA from libertarian and conservative think-tanks: the CATO Institute, the Competitive Enterprise Institute, and the Heritage Foundation, which called the NCA “alarmist fear-mongering.”

Sen. Tom Carper, D-Del., the ranking member of the committee, tried to impart a “sense of urgency” to Wheeler that he needed to act quickly to protect the environment — rather than invoking bureaucracy and process to justify his inaction. i

“This idea that we’re waiting for them or they’re waiting for us,” Carper said, referring to workers in different parts of government. “That’s not [right]. Your job is to basically be the leader for fighting this battle.”

Sen. Ed Markey, D-Mass., cited the fourth National Climate Assessment’s (NCA) dire forecasts for the harm global climate change will have on American infrastructure, public health, and the economy this century as evidence that Wheeler should take a leadership role in protecting the environment. The 1,600-page report was compiled by a consortium of 13 federal agencies and released by the Trump administration.

Markey asked Wheeler whether he disagreed with their conclusion that the actions currently taken by the EPA do not approach what’s necessary to avert catastrophe. Wheeler said he’s only been briefed on the NCA once and that he isn’t prepared to discuss it at this time.

Several protester are arrested by Capitol Police after being pulled out of the confirmation hearing for Andrew Wheeler to be administrator of the Environmental Protection Agency in the Senate Environment and Public Works Committee on Jan. 16, 2019.

Markey was aghast: “This report came out in November. You’re the head of the EPA! We’re heading to the end of January!”

“That’s unacceptable,” Markey continued. “You’re looking to be confirmed as the head of the Environmental Protection Agency and we’re having a hearing on your worthiness for this job. And you very conveniently haven’t had enough time yet to review whether or not there’s an extra level of urgency to this problem.”

The U.S. Chamber of Commerce, a lobbying group for American businesses, sent a letter of support for Wheeler’s nomination to the committee on Tuesday.

“Mr. Wheeler’s substantial public service experience makes him an excellent choice to lead the EPA. He began his career at the EPA, where he worked on toxic chemical, pollution prevention and right-to-know issues, and he was awarded the EPA Bronze Medal twice for his accomplishments,” wrote Neil Bradley, the chamber’s executive vice president and chief policy officer.

“Mr. Wheeler also has shown his ability to work with Congress, having previously served the Committee as majority staff director, minority staff director, and chief counsel. In these roles, he worked on all major environmental and energy-related legislation before Congress for more than a decade.”

The environmentalist community has been united in urging the committee and the full Senate to oppose Wheeler’s nomination.

Ahead of the hearing, Rhea Suh, the president of the Natural Resources Defense Council, released a statement saying Wheeler should not be promoted.

“The Senate should reject him immediately. The EPA is our last line of defense against toxic pollution and environmental ruin. The American people expect its chief to honor that mission and protect the environment and public health – not go to bat for polluter profits at the people’s expense,” Suh said.

Michael Brune, executive director of the Sierra Club, released a similar statement, arguing that the American people cannot afford to have the EPA run by someone who values corporate polluter profits more than clean air and water.

“A coal lobbyist shouldn’t be in charge of the EPA. Period,” Brune said. “In an administration that respected the rule of law and public health, this shutdown and this hearing would not be happening and Wheeler would have never been nominated in the first place. In his short time at EPA, and in his long career as a lobbyist for corporate polluters, Wheeler has proven himself to be a dangerous threat to the health of our families and our air and water.”

No further hearings on Wheeler’s confirmation are expected and the vote has not been scheduled yet.