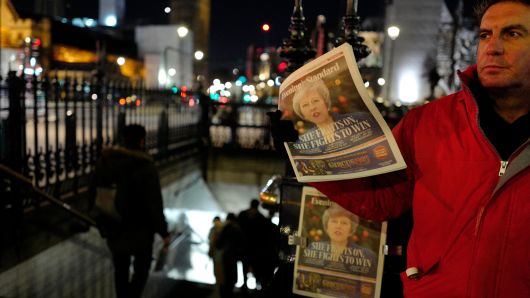 Following the resounding defeat of U.K. Prime Minister Theresa May’s Brexit deal in the U.K. Parliament last night, the global media are giving their reactions to the vote – and they’re not holding back.

May’s deal was roundly rejected by British members of Parliament (MP) with 432 MPs voting against it and 202 approving it, marking the worst political defeats in parliamentary history. The leader of the opposition Labour party, Jeremy Corbyn, tabled a motion of no-confidence in May’s government following the vote on the contentious “Withdrawal Agreement”, essentially it’s blueprint for leaving the European Union.

The U.K. government now has three working days to map out a new plan of action.

The vote, and the 230-vote loss, was covered in extensive detail by both U.K. and international media. For the British media, Tuesday’s vote that gave Parliament a say on May’s Brexit agreement with the EU was the climax of months of reporting on the intricacies of withdrawal negotiations with the EU and the warring ‘Remainer’ and ‘Brexiteer’ factions in Britiish politics.

Needless to say, British newspapers and media outlets didn’t hold back on their verdicts on the vote, the chaotic state and uncertain future of Brexit and Theresa May and her Conservative government. What will happen to Brexit as the departure date of March 29 draws near also dominated coverage. Here’s a selection of UK and global media reaction:

The Telegraph, a long-time ally of the Conservative party and pro-Brexit newspaper, branded the defeat ‘A complete humiliation’ on its front page Wednesday and showed a glum-looking Theresa May on the front bench of Parliament.

The Guardian, a stalwart of the left-wing media (and hence no friend of the ruling Tories) headlined its morning edition with “May suffers historic defeat as Tories turn against her,” with the paper noting that Tory ministers and MPs appeared split on whether to continue backing their leader and prime minister. The Brexit-opposing paper said May’s defeat was a “devastating verdict on the prime minister’s deal.”

Not known for their abashed style, U.K. “red-tops”, or tabloids, didn’t hold back either, with a number of them remarking that May’s Brexit deal is now “dead.” The Sun headlined its post-vote edition with the play on words, “Brextinct” and that “May’s deal is as dead as a Dodo.”

The Daily Mail, which ardently campaigned for Brexit under the leadership of infamous news editor Paul Dacre before changing tack under new editor Geordie Greig, said May is “Fighting for her life.”

The paper noted that despite Labour leader Jeremy Corbyn tabling a vote of no-confidence in Theresa May, she still has the support of the majority of her party. Corbyn would need two-thirds of MPs to support his motion for a general election to take place.

Official reaction to the vote came quickly after the result with European Commission President Jean-Claude Juncker remarking that “the risk of a disorderly withdrawal of the United Kingdom has increased with this evening’s vote. While we do not want this to happen, the European Commission will continue its contingency work to help ensure the EU is fully prepared,” he said in a statement, then urging the U.K. to clarify its intentions as “time is almost up.”

European Council President Donald Tusk tweeting that “if a deal is impossible, and no one wants no deal, then who will finally have the courage to say what the only positive solution is?”

Prime Minister May is not expected to go immediately to Brussels to try to renegotiate the deal and certainly Europe has showed no intentions of being willing to amend what’s on offer. The most contentious issue for British MPs is what’s known as the Irish “backstop” — essentially what status Northern Ireland and its border with Ireland would have in the event that the U.K. and EU could not strike a trade deal in the transition period following Brexit.

The Irish Times said May was “all at sea” as the “tide turns against her backstop deal” and that the scale of May’s defeat had surprised Dublin. Ireland is the EU country that could be most impacted by Brexit given the large amount of trade and cultural links between the U.K. and Ireland.

The Brexit vote headlined most major news outlets on the continent. Welt (formerly Die Welt) said that cheers heard after the vote result was announced was matched by “inside shock” and carried a picture of May and her closest ministers in Parliament. Der Spiegel, meanwhile, headline with the world “Crashed” and called the vote a “collision with reality.”

French daily Le Figaro also leads with the Brexit vote, saying that May’s deal has been “massively rejected.” It also carried comment from French President Emmanuel Macron who noted that the U.K. will ask the EU for amendments to the withdrawal agreement and said the EU might try to “improve on one or two points” but said he wasn’t hopeful of much movement from Brussels. Macron added that “the first losers of this are the British.”

Le Monde carried a live blog on the vote and reaction while Les Echos explored the uncertainties raised by the rejection of the withdrawal agreement. Spanish newspaper El Pais headlined its Wednesday edition with the comment: “The crushing defeat of May in Parliament sharpens the Brexit crisis.”‘

The New York Times led with May’s defeat in parliament and looked ahead to the confidence vote while the Washington Post said the defeat put the U.K.’s withdrawal from the EU “in doubt.” The Wall Street Journal echoed that sentiment.

In the Chinese press, the South China Morning Post noted that the Brexit deal was “basically dead” and that “Brexit (is) in chaos.” Meanwhile in Russia, newspaper Novaya Gazeta carried a report on the Brexit vote but others, like business daily Vedomosti, avoided the subject.

Russian broadsheet Izvestia which said that the vote could lead to the postponement of Brexit or an “outright political crisis in Britain” − most of the global press think that has already happened.