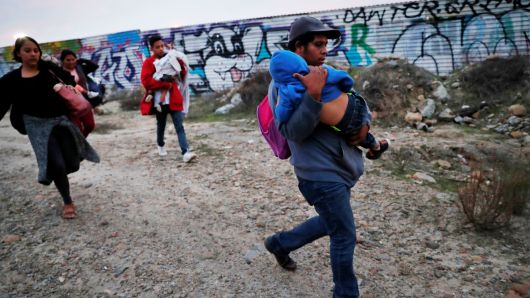 Although President Donald Trump has frequently called the situation at the U.S.-Mexico border a “crisis,” government data shows that arrests are down compared with the Obama administration as most illegal immigration occurs through overstaying temporary visas.

As the government shutdown enters day 18 with no resolution in sight, Trump has repeatedly overstated the severity of illegal immigration at the border in order to convince Congress to approve more than $5 billion in funding for a border wall.

“The crisis of illegal activity at our Southern Border is real and will not stop until we build a great Steel Barrier or Wall,” he tweeted Dec. 22, the day the shutdown began.

During fiscal 2018, which ran through the end of September, Customs and Border Protection (CBP) apprehended 396,579 undocumented immigrants at the southern border. That figure is lower than the 413,377 average yearly apprehensions during former President Barack Obama’s time in office and only a fraction of the 1,643,679 apprehensions in 2000, when Bill Clinton was in office.

Trump’s claims about the southern border also fail to emphasize that the majority of illegal immigration occurs when immigrants overstay their temporary visas. During fiscal 2017, the Department of Homeland Security (DHS) found that 701,900 immigrants with visas remained in the U.S. past their expected departure date, more than double the 303,916 immigrants apprehended at the border during that same time frame. A report by the Center for Migration Studies found this pattern to be true for every year since 2007.

One population at the border that has grown in recent years is asylum-seekers. In fiscal 2018, 92,959 people at the southern border requested asylum, up 67 percent from the previous year. Asylum-seekers made up 18 percent of all apprehensions at the border, “a dramatic departure from 2000-2013, when fewer than 1 percent of those encountered by CBP initiated asylum claims,” according to a CBP report.

The Trump administration has intentionally limited the number of asylum cases processed at the border each day, a practice known as “metering,” in an attempt to dissuade immigrants from coming to the country. However, DHS has acknowledged that the practice “may have led to additional illegal border crossings.”

Many asylum-seekers are fleeing poverty and violence in Central America. A 2015 report by the U.N. Refugee Agency called the growing numbers of asylum-seekers “a staggering indicator of the surging violence shaking the region.” Last month, the U.S. State Department pledged $5.8 billion in aid to Central America “in support of institutional reforms, development, and economic growth,” according to a statement.

And though the administration has claimed that many terrorists are among those crossing the border, in the first half of 2018 CBP apprehended only six people on a government terrorist watchlist.

Still, Trump remains committed to securing funding for a border wall, one of his main campaign promises, even as the amount requested would fund only about 234 miles of the nearly 2,000-mile border, according to a letter sent to Capitol Hill by the Office of Management and Budget on Sunday.

Trump has recently threatened to invoke emergency powers, which could allow him to use already appropriated military funding for his wall. That effort would likely be challenged in the courts.

The president will hit the airwaves on Tuesday night to reiterate his case. “I am pleased to inform you that I will Address the Nation on the Humanitarian and National Security crisis on our Southern Border,” he announced Monday on Twitter.