Latest News
Home News House Democrats have a good shot at getting Trump’s tax returns in the next Congress, but his administration could fight back 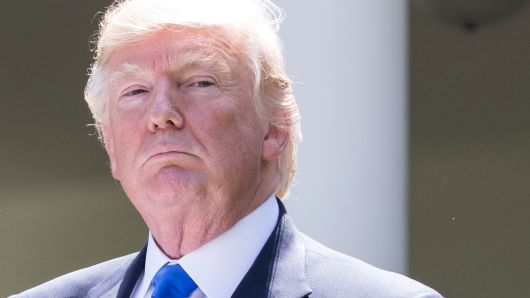 House Democrats have a good shot at getting Trump’s tax returns in the next Congress, but his administration could fight back

A decades-old law could soon give Democrats their best shot yet at extracting President Donald Trump’s tax returns from the Internal Revenue Service.

But while the legal path to obtaining and publicly sharing Trump’s coveted tax filings may be relatively straightforward, some of the president’s supporters have already vowed to resist such a request from Democrats. That refusal could set up an unprecedented legal battle between lawmakers and the Trump administration.

As a presidential candidate, Trump broke with the tradition followed by most candidates since Richard Nixon by refusing to release his tax returns. Trump had promised to release the documents following the completion of an audit — a status that fact-checkers have concluded does not bar him from disclosing them.

Two days after his inauguration, senior advisor Kellyanne Conway said Trump is “not going to release his tax returns” because “people didn’t care.” More recently, he insisted that his returns are too complex for people to understand.

When Democrats gain majority control of the House of Representatives on Thursday, they will also take over the top slots on the various House committees. That includes the House Ways and Means Committee, which carries the legal authority to make a formal request to obtain years of Trump’s tax returns.

A provision in a Calvin Coolidge-era tax law allows Ways and Means, as well as the Senate Finance Committee and the Joint Committee on Taxation, to send a written request enjoining the Treasury secretary to fetch any individual’s returns from the IRS.

The documents would then be delivered for committee members to view in a confidential setting. From there, the committee could publicly release the returns, according to University of Virginia law professor George Yin.

As the minority party, Democrats made more than a dozen failed attempts to obtain Trump’s tax returns through the 1924 provision, which was added with the then-brewing Teapot Dome investigation in mind. With a majority in the House, Democrats will have the power to back up their demands.

“The new Democratic House will be dedicated to conducting actual oversight of an executive awash in corruption. That oversight begins with Trump’s tax returns, which absurdly to this moment haven’t seen the light of day,” said Rep. Bill Pascrell, D-N.J., who has led the charge in pursuit of Trump’s returns.

With Republicans maintaining control of the Senate Finance Committee, all eyes have turned to Ways and Means Chairman-designate Rep. Richard Neal, D-Mass., to submit that written request.

Neal has already said “Yes, I think we will” ask for Trump’s tax returns when he takes control of the committee.

If the administration refuses to comply, Neal told the Associated Press, “Then I assume that there would be a court case that would go on for a period of time.”

Once the request is sent to the Treasury chief — in this case, Steven Mnuchin — the text of the law itself appears to provide little wiggle room to object. That law says the Treasury secretary “shall furnish” the documents to the committee members requesting them.

“From my perspective, this should be relatively cut and dried,” said David Kamin, a professor specializing in tax and budget policy at the New York University School of Law.

Yin told CNBC that a request to get Trump’s tax returns would likely be consistent with the committee’s oversight role and its ability to investigate. In a 2017 op-ed Yin said the tax committees had a right under the law to order a public tax return disclosure “as long as a disclosure served a legitimate committee purpose.”

Both sides of the issue appear to anticipate a fight if the written request is sent.

House Speaker-designate Nancy Pelosi, D-Calif., said in December that obtaining the president’s returns is “a little more challenging than you might think.”

“I’m sure that the White House will resist, and the question is, where do we go from there?” Pelosi said.

NBC News reported Wednesday that House Democrats have added a provision to a forthcoming bill that would require presidential nominees to disclose a decade of tax returns shortly after being nominated. That bill would affect future candidates, but not Trump.

Some of Trump’s defenders have decried prior attempts to snag Trump’s tax filings as politically motivated.

Former N.J. Gov. Chris Christie, a Republican, in May 2017 vetoed a bill that would have required Trump to show his taxes if he ran for re-election in the state. The bill represented “politics at its worst,” Christie said at the time.

Trump’s lawyer, former New York Mayor Rudy Giuliani, said in the AP story that Democrats may have trouble proving that their demand is a legitimate legislative move, rather than a partisan maneuver.

Kamin told CNBC that it’s possible Mnuchin could refuse to comply with the request, perhaps by arguing that Congress is exceeding its constitutional authority. But Mnuchin, who would be a central player in the process Democrats are expected to utilize, has merely reiterated through a representative that he “will review any request with the Treasury general counsel for legality.”

IRS Commissioner Charles Rettig could also technically refuse to comply with Mnuchin’s direction to collect Trump’s tax returns. Prior to joining the Trump administration, Rettig had defended Trump’s refusal to release his filings.

“Would any experienced tax lawyer representing Trump in an IRS audit advise him to publicly release his tax returns during the audit? Absolutely not,” Rettig wrote in an op-ed in 2016 when he was a partner at accounting firm Hochman, Salkin, Rettig, Toscher & Perez.

Still, Kamin said he believes Democrats could prevail even in the face of a legal challenge.

“If they root this in the proper investigation and oversight,” Kamin said of the committee Democrats, “they should get it.”