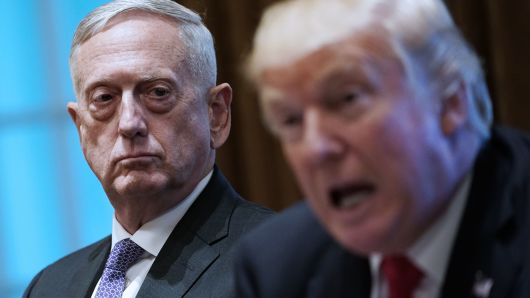 President Donald Trump announced on Sunday that Defense Secretary James Mattis will depart the Pentagon by January 1, a date earlier than anticipated after his stunning resignation, and will appoint Patrick Shanahan — the agency’s number 2 official — as acting Secretary.

The president’s announcement, made via Twitter, comes days after Mattis stunned Washington by announcing his resignation, prompted by what the former marine said were policy differences with Trump. The move was amplified by news on Saturday that Brett McGurk, the U.S. envoy to the global coalition fighting Islamic State-inspired terrorism, resigned in protest to the Trump administration’s plans to withdraw troops from Syria.

Department of Defense
Defense Department’s Patrick Shanahan, before he was tapped by President Donald Trump to serve as the department’s Acting Secretary

Amid tensions with Mattis, the president sent shock waves through the global security establishment last week by announcing troop drawdowns in both Syria and Afghanistan, moves that Mattis was said to oppose. In his resignation letter, the general delivered a harsh assessment of his boss’ policy objectives.

A New York Times report suggested the letter’s phrasing — which led to endless negative headlines — was the impetus behind Trump’s decision to remove him earlier than expected.

“Trump’s decision to accelerate Mattis’ departure … seems like more of the same ungrateful and precipitous behavior which characterizes the Trump presidency,” said Carl Tobias, a legal scholar at the University of Richmond School of Law.

“Mattis has served the nation honorably and effectively for decades, and his resignation letter was clear and pragmatic about the US role in the world. Mattis’ successor… must be as careful, wise and realistic as Mattis,” Tobias said.

On Saturday, Trump appeared to take a veiled swipe at his former Pentagon chief, saying on Twitter that he gave Mattis the benefit of the doubt when he was booted by the Obama administration.

“When President Obama ingloriously fired Jim Mattis, I gave him a second chance. Some thought I shouldn’t, I thought I should,” Trump stated. Responding to the former general’s resignation letter, in which he suggested the U.S. should hold fast to its global allies and international commitments, Trump said that “allies are very important-but not when they take advantage of [the] U.S.”

Shanahan, a former Boeing executive, became the deputy secretary of defense in 2017. A Washington state native like Mattis, Shanahan is responsible for managing the Pentagon’s colossal $700 billion defense budget.

He has spent the last year in his role as the No.2 defense official, focused on reforming the internal processes of the Pentagon.

Shanahan “will continue to serve as directed by the president,” said U.S. Army Lt. Colonel Joe Buccino, to CNBC on Sunday. “The Department of Defense will remain focused on the defense of the nation.”