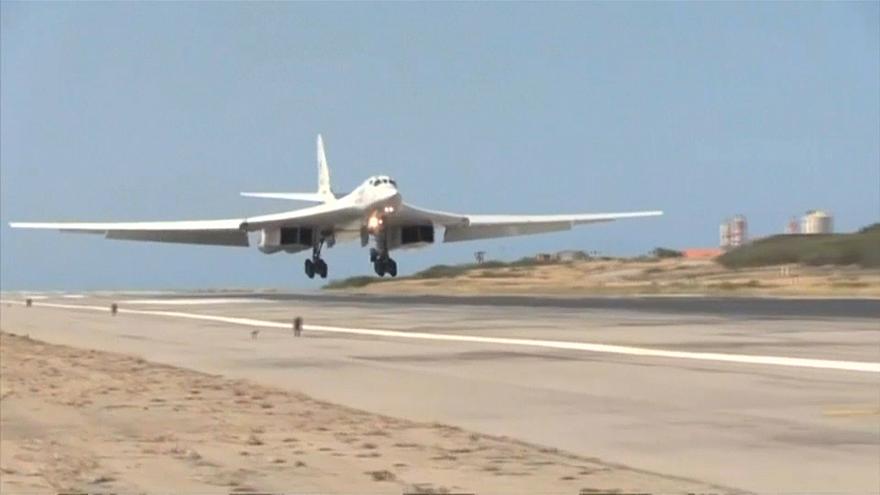 Russia has infuriated the US by flying two aircraft capable of carrying nuclear warheads to Venezuela.

The TU-160 supersonic bombers, called “White Swans” by the Russian pilots who fly them, landed at Maiquetia airport near the capital Caracas on Monday.

His left-wing administration has often found itself at odds with Washington.

US Secretary of State Mike Pompeo called the flight a waste of time by a corrupt government.

“Russia’s government has sent bombers halfway around the world to Venezuela,” fumed Pompeo on Twitter.

“The Russian and Venezuelan people should see this for what it is: two corrupt governments squandering public funds, and squelching liberty and freedom while their people suffer.”

Venezuela is a member of OPEC but its economy imploded as the price of oil collapsed and the Maduro administration has been accused of squandering billions on populist policies.

Tens of thousands of people have fled to neighbouring countries because of food shortages.

The country turned to Russia for help and Moscow became a key lender, investing in its oil industry and providing support to its military, alarming Washington.

But the Kremlin refuted Pompeo’s criticism calling it undiplomatic and inappropriate.

“As for the idea that we are squandering money, we do not agree. It’s not really appropriate for a country half of whose defence budget could feed the whole of Africa to be making such statements,” spokesman Dmitry Peskov told reporters.

Russia’s Defence Ministry did not say if the planes were carrying missiles, how long they would stay for, or what their mission was.

Moscow has used the aircraft in the past to demonstrate its military strength under the nose of the United States.

Maduro has frequently cited the possibility of an invasion by the U.S. but Washington has denied any such plans.