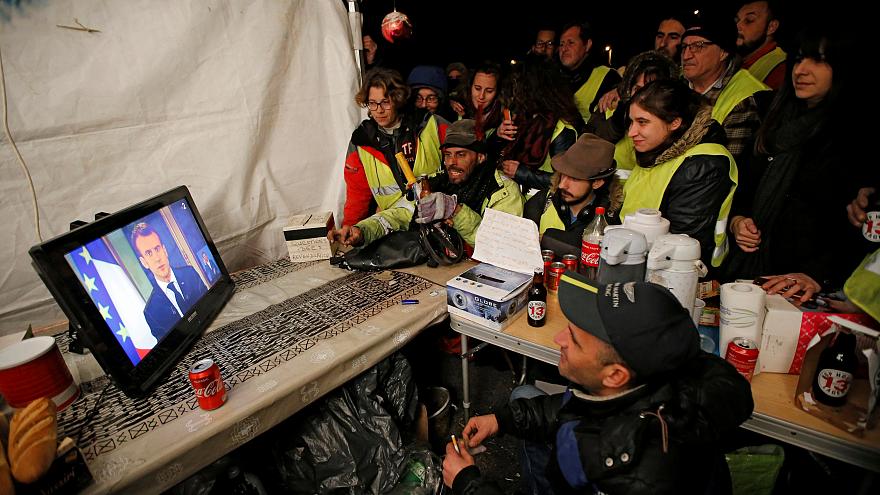 ‘Gilets jaunes’: will Macron’s concessions be enough to stop the protests?

French President Emmanuel Macron unveiled a series of measures in a bid to quell the anger of “gilets jaunes” (“yellow vest”) protesters.
The concessions included a €100 monthly rise in the minimum wage, the abolition of taxes on overtime pay in 2019, a promise that end-of-year bonuses will be tax-free and the scrapping of a new tax on pensioners earning less than €2,000 a month.

But will the president’s climbdown be enough to stop further protests and violence this weekend?
“Yellow vest” protesters
Taking the pulse of the citizen movement is fairly difficult as it is not affiliated to any political party or union and it has no leadership structure.
One of the movement’s leading figues, Jacline Mouraud, has called for a “truce” because “there’s progress, an open door,” according to France Info.
But Benjamin Cauchy, one of the public faces of the movement, told France 2 that Macron presented “half measures”.
“We can feel that Macron has got a lot more to give,” he added, suggesting the protest would continue.
On Facebook, where the protests are organised, many groups are calling for an “Acte 5” — a fifth day of national action on Saturday.
Views on Macron’s speech also varied widely.
“What else could you possibly want?,” a user called Paul Delatuile, wrote in the “Acte 5: Macron Demission (Resignation)” page.
Another, Julier Quint, also wondered: “Is it me or is the movement disintegrating because of [what] the president said yesterday?”
However, Brian Dfor, described the speech as “hot air” and called on other protesters “to not give up”.
Politicians
Jean-Luc Melenchon, leader of the far-left La France Insoumise party, said Macron’s measures fail to take into account any “of the popular demands for more participatory democracy”.
“I believe that the fifth act of the citizen revolution in our country next Saturday will be a moment of great mobilisation,” he forecasted.

On the other end of the political spectrum, at the far-right National Rally, Macron’s speech also failed to convince.
“I don’t think that Emmanuel Macron’s announcements yesterday fundamentally change things,” one of the party’s MEPs, Nicolas Bay, told France Info radio on Tuesday.
He added that “in substance, it’s still very vague, and we’re far from sincerity”.

Experts
According to Oliver Davis, professor of French politics at the University of Warwick, UK, further protests are to be expected on Saturday in Paris and across the country.
“A key question is whether his speech will have changed the way the movement is viewed by the wider population,” Davis told Euronews.
The movement is supported by more than 70% of French people, according to a survey.
“If public support of the movement doesn’t ebb away then I would expect to see further concessions, probably on the ISF (wealth tax),” he added.
However, if support decreases on the back of the new measures, Davis forecasted, “we will likely begin to see the protests dissipate and more vigorous security measures employed against them”.
For Antonio Barroso, senior vice president at political consultancy Teneo Intelligence, “Macron’s hope is probably that the combination of the announced measures plus the upcoming holiday break will calm things down a bit”.
“I think Macron is likely to stick to his strategy of detente while avoiding to take any big political decisions such as a reshuffle or early legislative elections,” Barroso told Euronews.
“However, if the protests continue, he might have to consider taking bolder moves such as replacing his prime minister,” he added.
Pierre Bocquillon, lecturer in EU Politics and Policy at the Universiy of East Anglia, UK, told Euronews the measures will probably be perceived as “too little too late” so it remains to be seen whether they will be enough.
“At the same time the movement is probably starting to run out of steam as it can be exhausting to protest especially without the logistical support of Unions and organisations (given the grassroot nature of the movement).
“One question is: how will the yellow vest movement evolve? Will it turn into an electoral group for the European elections? Will it feed into electoral competition? There is a distrust of traditional parties and Unions, but it will have to find an institutional form to last,” Bocquillon said.
Media
For Laurent Joffin at the left-wing Liberation newspaper, Macron is “betting on a fall in support for the ‘yellow vest’ protesters. But the movement, in all probability, it won’t stop overnight.”
Laurent Bodin made a similar point in la Voix du Nord: “The measures unveiled last night, with this new mea culpa on top of his comments that “may have hurt” will not bring calm overnight, nor will it make the bright yellow disappear from roadsides.”
At the Dernieres Nouvelles d’Alsace Pascal Coquis wrote that “the first reactions from yellow vests showed more than scepticism and distrust towards the head of state.”
But for Leela Jacinto, International Affairs Editor at France 24, Macron’s “contrite” speech could spell a change in the protest.
“If gilets jaunes protests continue will they have any credibility with the French people — besides the Le Pen, Melenchon crowd?” she asked.

Popular In the Community

GreenCoffee
2h
The emergency is… The extreme Tory brexiteers are actually standing up against their party, something practically unheard of from Tory politicians and because of this and Mrs May struggling to maintain the support of the DUP, the government is falling apartBut that’s not what’s being debated, they’re just pointlessly going over how the deal doesn’t actually achieve Brexit and Mrs May is now out of options
Experts: Kramp-Karrenbauer’s election should reassure Europe

RedPalmtree
13h
Clearly we are at a point where the society begins to tear apart. The future doesn’t look good. One thing I don’t understand though: Why not helping the migrants where they are? These big companies with billions and billions at their disposal. The billionaires themselves….why bring them here where they don’t integrate, and build parallel societies? Why is it always us the regular worker who barely make it from one month to another that has to bear the burdens? And how long do these politicians think we can take it?
‘Gilets jaunes’: Five takeaways from Macron’s address

GoldQuill
16h
He said a whole lot of nothing as we all expected. And the media, as always, are hiding the fact that the strongest opposition is to the open migration and the invasion of indigenous European homelands.
Former ‘gilets jaunes’ Facebook page administrator tells her story

PurpleTag
9h
This girl did the right thing when she denounced her part in something that became entirely different than it was supposed to be: a peaceful legal protest to support the poor through a small number of agents for anarchy became a force of destruction where even peaceful demonstrations were intentionally turned into violent riots hurting mostly those poor that were supposed to be helped. The intention for these anarchists, many of them Le Pen’s goons for political purposes, has always been to damage the France so that they could gain momentum in political arena where so far they have lacked any major success due to heavy resistance from the majority of voters.
Andy Serkis reprises Gollum character to mock May’s Brexit plan

GreenLeaf
16h
Except May is an ardent Remoaner. So this makes no sense in the least. Try again!
The spirit of Franco lives on in the Constitution – and Catalans want nothing to do with it | View

Iustin Heisu
33m
Nah, only the spirit of Marx lives on in the dictatorship of the leftist international media, pseudo-culture, pseudo-education…
Watch: Protest breaks out at COP24 speech after US announces no change to climate policy

BlueStrawberry
3h
Ok, scream and shout and now go back to your nice cars and comfy homes heated by electricity or natural gas, the former created by huge turbines requiring resource-intensive manufacturing while you use plastics in a high percentage of things to prepare your arugula and tofu salad. You ‘d still be driving around in horse carts without oil but I guess then there would be anti-horse cart movements.
Anti-Semitism ‘remains pervasive’ in EU, survey finds

BlueSailboat
4h
He’s so nice.Mate we are not a bit of a joke. WE ARE THE JOKE OF THE CENTURY.In a way be’s also happy because he’s party in not in charge of this chaos.
Italian priests say they will welcome migrants evicted from detention centres

GoldChefHat
20h
I am also asylum seeker in Italia. My house is also and always available for the people’s help
Rights are under threat in Europe – but 2018 has given some cause for hope | View

Gyula Nyakas
21h
You mash together a variety of cases that have nothing to do with each other, except that they all contain perceived injustices against certain groups of people. But who those people are, why they are being threatened, and (something you fail to mention completely) why the certain governments are taking those steps differ enormously. Then you falsely draw some overarching conclusion, that this is all about those countries turning into dictatorships. In many of these countries people voted for these governments exactly because they are willing to do something about these problems, even if the solution is aggressive or outright immoral, instead of just putting their head into the ground.
Follow live: British PM Theresa May delays parliament vote on Brexit

GreenCactus
22h
I still don’t understand what is the point of voting if the politicians or courts will decide for you doesn’t matter what the people want.But I totaly agree with this : We may as well have a dictator in charge and be done.
Raw Politics: What is May’s tactic behind delaying the Brexit vote?

blighty
5h
What an embarrassment Traitor May isThe EU must be Baffled by her, The UK is
Hungary warns of more anti-migration campaigns if EU continues to ‘reject’ its government

OrangeSubmarine
5h
The UK legt because of the migration crisis, the southern countries have been complaining for years ( started with Greece ), Belgium can’t cope with the migrants, just like every country in East-Europe.Brussel ignores, countries and countries ignore the voice of the people.