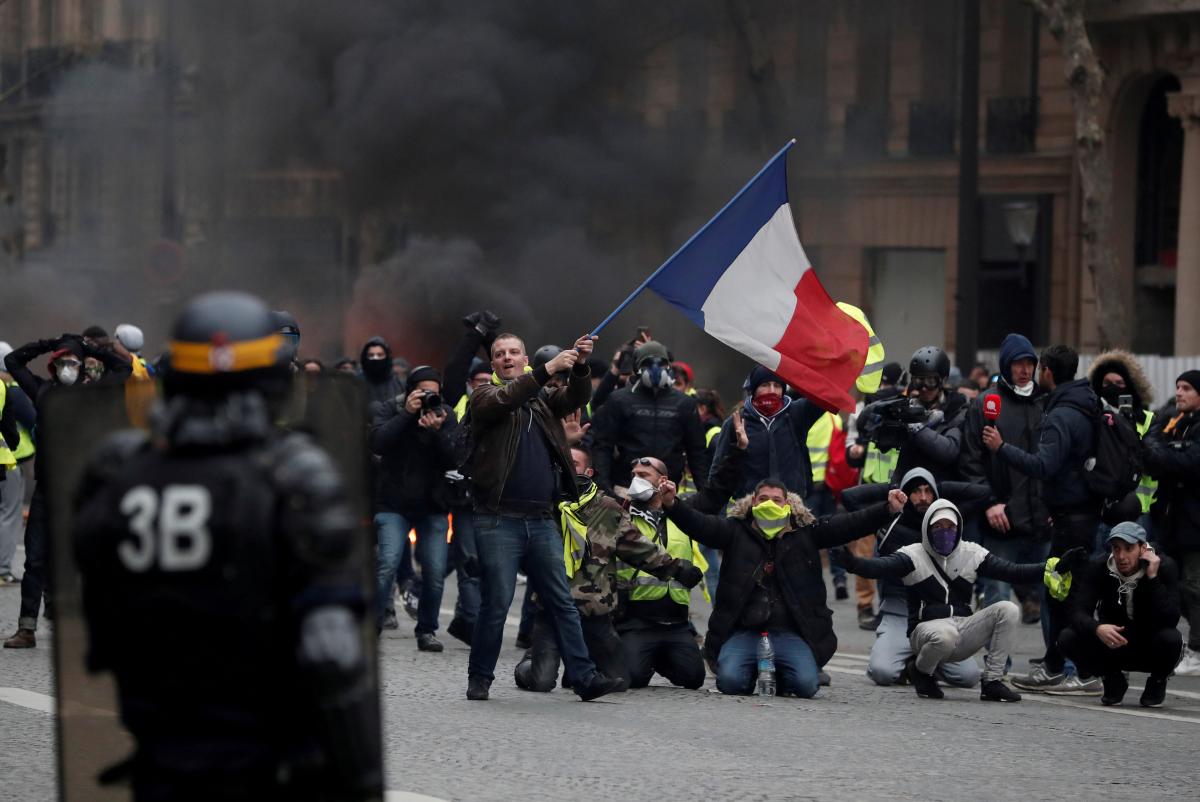 A protester waves a French flag during clashes with police at a demonstration by the "yellow vests" movement in Paris, France, December 8, 2018. REUTERS/Benoit Tessier

The anti-government protests convulsing France will slow growth to close to a standstill in the final quarter, the central bank said on Monday, complicating President Emmanuel Macron’s task of finding concessions to placate the “yellow vest” movement.

The Bank of France on Monday forecast the euro zone’s number two economy would eke out growth of only 0.2 percent in the quarter from the previous three months, down from 0.4 percent in a previous estimate.

Finance Minister Bruno Le Maire declined to give an estimate for 2018 growth but forecast the nationwide tumult would trim 0.1 percent of a point off of national output. His deputy projected growth would round out “closer to 1.5 percent”.

The slow-down will be worrisome for Macron, who faces huge pressure on the streets to make further cuts to taxes and social security costs to bolster household spending power, while keeping France’s budget deficit below a European Union cap.

The slowdown is a “reality for our businessmen, entrepreneurs, it’s the reality for those whose shops were vandalized, looted, in the most violent way,” Le Maire told RTL. “And it’s a reality too for our foreign investors.”

Police used tear gas, water canon and horses to charge protesters hurling projectiles, torching cars and ransacking some shops, though they encountered less violence than the previous Saturday, when the capital encountered its worst violence since the 1968 student uprising.

Upscale department store Printemps, which shut its flagship store in Paris on Saturday, typically one of the busiest days of the year ahead of Christmas, said it had suffered a 25 to 30 percent slump in sales since the unrest began.

“There has been a colossal loss in sales and they won’t be recouped,” Pierre Pelarrey, who runs Printemps Haussmann, told Reuters.

Nationwide, shopping centers saw a 17 fall in people passing through the doors, the CNCC grouping of mall operators said.

In a sign of the perceived heightened risk of holding French debt, French government bond yields rose on Monday, pushing the French/German 10-year bond spread to its widest since May, at around 46 basis points in early trade. DE10YT=RR FR10YT=RR

The president has drawn criticism for his silence in public over the violence in Paris – opponents accuse him of turning the Elysee Palace into a bunker. Ministers hope he will placate the yellow vests, whose revolt poses the most formidable challenge to his 18-month administration to date.

People walk by a vandalized savings bank window the day after clashes during a national day of protest by the “yellow vests” movement in Paris, France, December 9, 2018. REUTERS/Piroschka van de Wouw

“Our country is deeply divided, between those who see that globalization has benefited them and others who can’t make ends meet, who say … globalization is not an opportunity but a threat,” Le Maire told RTL.

“It is the president’s role to unify the country.”

The protests were born out of a backlash against the squeeze on the household budgets of hard-pressed middle class and blue-collar workers. But the movement has developed into a broader anti-Macron rebellion.

The former investment banker is under pressure to respond to the demands of yellow vests for a higher minimum wage, lower taxes, and better retirement provisions, though more concessions will leave France in danger of breaching EU deficit rules.

“The big picture is that the budget deficit will worsen and political problems will make cuts to spending hard,” said Rabobank rates strategist Lyn Graham-Taylor.

The government’s latest estimates are for a budget deficit of 2.8 percent in 2019, just below the EU’s 3 percent cap – a target Macron has cast as critical to meet to cement his reformist credentials.

Le Maire reiterated his desire to accelerate tax cuts but suggested he was not in favor of reinstating a tax on wealth — known as the ‘ISF’ — that Macron narrowed when he came into office, and which earned him the tag “president of the rich”.

“Does the ISF help reduce poverty, reduce our debts, reduce public spending? No. If you want to hunt for money, go knocking on the doors of digital tech companies,” Le Maire said.

A protester waves a French flag during clashes with police at a demonstration by the “yellow vests” movement in Paris, France, December 8, 2018. REUTERS/Benoit Tessier