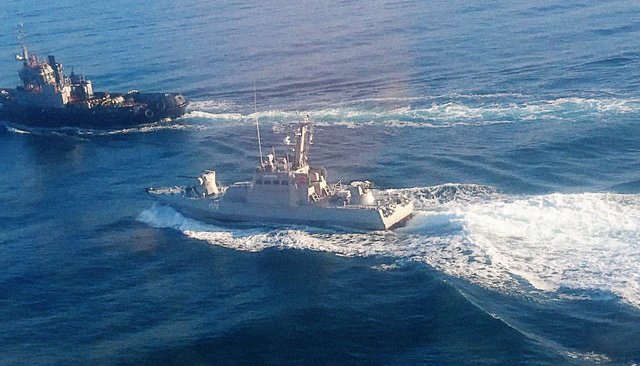 On November 25, Russia’s Federal Security Service (FSB) border guards fired on and seized three Ukrainian naval vessels in the Kerch Strait area. Kyiv says at least of its six sailors were injured in the gunfire. The seized ships were brought to Kerch, where the wounded men received medical attention. The FSB says the ships violated Russia’s international border.

Ukrainian President Petro Poroshenko has demanded the immediate return of the country’s sailors and ships, calling the FSB’s actions a violation of international law. On November 26, Ukraine’s Security Service opened a criminal investigation, formally accusing Russia of “waging an aggressive war.” (Anyone in Ukraine convicted of assisting in this effort faces up to 15 years in prison.)

In response to the Kerch Strait incident, Poroshenko wants to impose martial law in Ukraine for the next 30 days. The parliament will vote on the proposal on Monday. The country’s military has already been placed on full alert, and the initiative has the support of Ukraine’s National Security and Defense Council. Poroshenko promises that martial law would not mean Ukraine’s immediate mobilization for war or the restriction of civil rights.

On November 26, hours before the Verkhovna Rada’s vote, Poroshenko signed an executive order imposing martial law in Ukraine for 30 days, simultaneously submitting a bill to the parliament for approval. The document published by Poroshenko’s office allows him to strengthen the country’s air defense around strategic government facilities, increase security at the Russian border, and organize a census of reservists, in the event of a partial mobilization. Ukraine’s parliament later voted the martial law initiative into law, which will take effect on November 28 and last 30 days, effective only in regions bordering Russian troops and the unrecognized Pridnestrovian Moldavian Republic (more commonly known as Transnistria), in other words, in 10 of Ukraine’s 27 regions. The final agreement will not postpone Ukraine’s March 2019 presidential election.