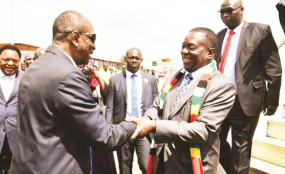 Zimbabwe is under Western sanctions for nearly 20 years

Conakry, Guinea — President Mnangagwa arrived here yesterday on a two-day State visit at the invitation of President Alpha Condé and will use the occasion to appeal for African support in Zimbabwe’s efforts to re-engage the West and end economic sanctions on the country.

Zimbabwe is under illegal Western sanctions which have hurt its economy for nearly 20 years.

President Mnangagwa landed at the Airport Conakry Gbessia in the afternoon and was welcomed by his host, President Condé, who is past President of the African Union (AU).

The President received a 21-gun salute and inspected a guard of honour.

He had a brief meeting with President Condé and the two leaders were set for a closed-door dialogue last night.

“We are consolidating African support towards our re-engagement with the Western world where we must make sure that all the sub-regions of Africa are solidly behind Zimbabwe in its efforts to break sanctions as well as achieve some rapport with the West,” said Mr Charamba.

“Generally, you are more effective when your neighbour adopts your own cause so that it becomes an African position. That is precisely what we are trying to do by consolidating our support in Sadc, which we have already done. You notice that the last Sadc summit (held in Namibia) passed a resolution against sanctions. Now, we are trying to bring that same consensus continentally and in the case of French West Africa, we also expect that countries like Guinea Conakry will help put in a word for Zimbabwe to the French, who by the way, are critical especially after the exit of Britain,” he said.

He added: “We are also aware that the French Bank Lazard is working with Afreximbank to put up a financial package for Zimbabwe as well as help the country reconnect with international financial institutions. France is a key member of international financial institutions and it is important that we consolidate our interests and our message to Francophone Africa. We have been to Mali. We are now in Guinea Conakry and Guinea Conakry is critical to us because this is the past President of the AU. He (Mr Condé) also has clout in this sub-region.”

Mr Charamba said it was important to seek African support in the removal of sanctions.

“He is the past President of AU. We want to consolidate our viewpoint and our own interests so that it helps us to persuade West Africa to complete the agitation for the removal of sanctions as well as re-engagement with the west but more critically, we think that Guinea is in a good position to consolidate our relations with the French who, by the way, are very forthcoming now as evidenced by Bank Lagard which is working with Afreximbank to create a facility for Zimbabwe,” said Mr Charamba.

President Mnangagwa’s administration has been pushing for engagement and re-engagement in an effort to end Zimbabwe’s isolation from the West since 2000 as a result of the land reclamation programme.