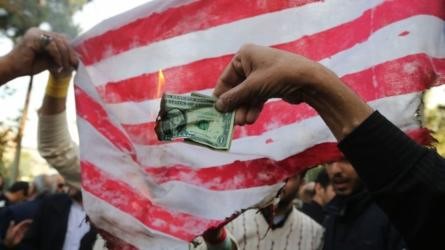 Iran’s President Hassan Rouhani has vowed to “break” swingeing sanctions re-imposed by the US targeting core parts of the economy.

The Trump administration is restoring all sanctions lifted under the 2015 nuclear deal in a bid to pressure Iran.

They will hit oil exports, shipping and banks, and make it difficult to do business with the oil-rich nation.

“We will proudly break the sanctions,” he said at a meeting of economic officials.

European countries which are still party to the accord designed to curb Iran’s nuclear activity say they will help businesses bypass the sanctions. But there are doubts how successful this will be.

How did we get here?

US President Donald Trump withdrew the US from the nuclear accord earlier this year, an agreement he called the “worst deal ever negotiated”.

It offered Iran sanctions relief in exchange for reducing its nuclear development. The global nuclear watchdog, the IAEA, says that Iran has complied with the agreement.

President Trump says that he wants to get Iran back to the negotiating table. 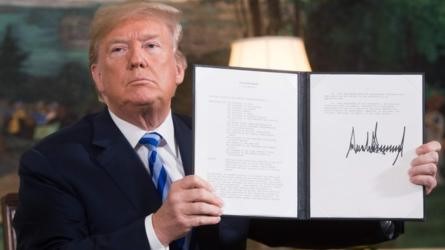 His administration also says it wants to stop what it calls Tehran’s “malign” activities including cyber attacks, ballistic missile tests, and support for terror groups and militias in the Middle East.

The president says his “maximum pressure” strategy is working. “[Iran] wanted to take over the whole Middle East. Right now they just want to survive,” he told a rally in Tennessee, Reuters reported.

What could the impact be?

The US reinstated a raft of sanctions in August, but analysts say this latest round is by far the most significant.

More than 700 individuals, entities, vessels and aircraft are now on the sanctions list, including major banks, oil exporters and shipping companies.

In addition, the Brussels-based Swift network for making international payments is expected to cut off links with targeted Iranian institutions, isolating Iran from the international financial system.

Secretary of State Mike Pompeo said the US aimed to reduce Iranian oil sales to zero.

The Trump administration though has granted exemptions to eight countries to continue importing Iranian oil, without naming them.

They are reported to include US allies Italy, India, Japan and South Korea, along with Turkey, China and India.

How do other countries see it?

The UK, Germany and France – which are among the five countries still committed to the nuclear pact – have all objected to the sanctions.

They have promised to support European firms that do “legitimate business” with Iran and have set up an alternative payment mechanism – or Special Purpose Vehicle (SPV) – that will help companies trade without facing US penalties. 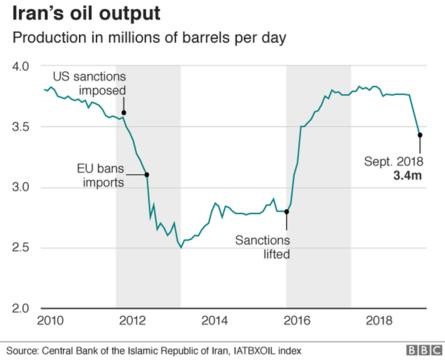 However, analysts doubt this will materially lessen the impact of sanctions on Iran, given the importance of the US to global trade.

Mr Pompeo said more than 100 big international companies had withdrawn from Iran because of the looming sanctions.

Even if firms can use the SPV, any US company it does business with could face punishment.

Another signatory to the nuclear deal, China, has said it regrets the re-imposition of sanctions and that its lawful trade with Iran should be respected.

What has the reaction been in Iran?

Even before the US sanctions were re-imposed, Iran’s economy has had a difficult year, with Iran’s currency, the rial, plummeting against the dollar, driving up the price of basic goods.

“I am scared. I am worried. I am desperate,” a teacher in the Iranian capital Tehran told Reuters late last week.