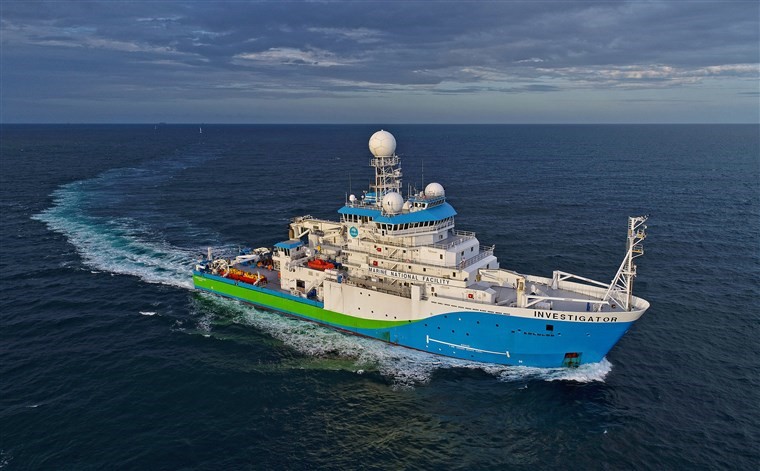 Huge underwater volcano chain discovered of the coast of Tasmania.

Scientists uncovered a chain of volcanic seamounts off the coast of the Australian island of Tasmania.

While mapping the seafloor some 250 miles off the coast of the Australian island of Tasmania, scientists recently discovered what’s being called a “volcanic lost world” deep underwater.

The chain of volcanic seamounts — huge undersea mountains that loom as tall as 9,800 feet, or more than six times taller than the Empire State Building — offer a glimpse into a previously unknown ocean ecosystem.

The seamounts vary in size and shape, with some having sharp peaks and others having plateaus, Tara Martin, a researcher with the Commonwealth Scientific and Industrial Research Organisation in Hobart, Tasmania, said in a statement. But even the tallest seamounts were still at least 6,500 feet below the ocean’s surface.

The scientists also encountered an unusual abundance of marine animals in the area, including humpback and long-finned pilot whales as well as albatrosses, petrels and other seabirds.

The unexpected discovery, made by scientists aboard the organization’s research ship Investigator during a 25-day mapping expedition, highlights just how little we really know about the bottom of the ocean.

“We’ve only mapped a tiny fraction of the ocean floor,” said Andrew Fisher, a marine geologist at the University of California, Santa Cruz, who was not involved in the new discovery. “We have more detailed maps of Mars, Venus and the moon than we do of the seafloor. Other planetary bodies can be mapped in high resolution with satellites, but on Earth, the water layer gets in the way. The only way is to go out with ships.”

The research vessel Investigator is owned and operated by the Commonwealth Scientific and Industrial Research Organization, Australia’s national science agency.

More than 80 percent of the ocean remains unmapped and unexplored, according to the National Oceanic and Atmospheric Administration. That’s because it’s difficult and time consuming to create detailed seafloor maps. Sonar-equipped research vessels like the Investigator must make a series of passes over an area in a process Fisher likened to mowing a lawn.

The Australian researchers plan to study the seamounts off Tasmania in greater detail during future expeditions over the next two months.